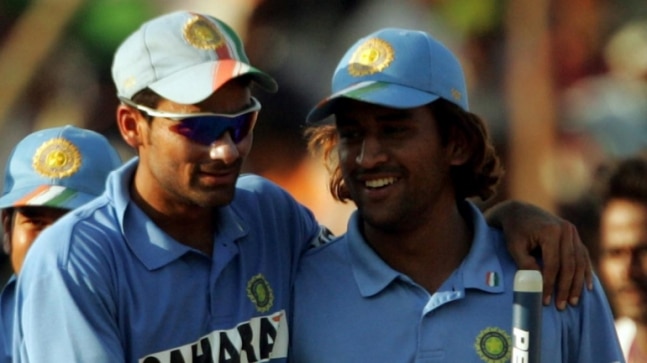 MS Dhoni is one of the finest wicketkeepers to have played the sport. With 444 international dismissals, Dhoni finished next only to Kumar Sangakkara and Adam Gilchrist on the all-time charts.

Well, Mohammad Kaif has got proof to instantiate his claim. Kaif, who is currently with the Delhi Capitals as their assistant coach in the UAE for Indian Premier League (IPL ) 2020, shared a throwback video in which Dhoni and him can be seen combining to effect a run out in a match against South Africa.

As the batsman tries to pinch a single against Harbhajan Singh after playing a defensive shot, Dhoni drops his gloves and runs to the cover region to pick up the ball and throw it at the striker’s end. Kaif, who is positioned at short leg, rushed to the wickets and collects the throw before disturbing the woodwork in time.

“I guess MSD would have made a good fielder no matter where he stood on the field…And maybe, I wouldn’t have been a bad wicketkeeper either ;)” Kaif wrote.

Check out the throwback video

I guess MSD would have made a good fielder no matter where he stood on the field…And maybe, I wouldn’t have been a bad wicketkeeper either 😉 pic.twitter.com/j4dgK71mvL

Cricket analyst Sarang Bhalerao was quick to point out that Mohammad Kaif was caught at covers by MS Dhoni in the final of IPL 2008 when Parthiv Patel was keeping wickets for Chennai Super Kings.

Dhoni, who retired from international cricket on August 15, is in the UAE, leading the training sessions with CSK. Dhoni looked sharp at the nets as he hit some big sixes in Dubai.

Meanwhile, former India fast bowler Irfan Pathan pointed out that MS Dhoni has been keeping wickets at the nets in Dubai, which is a rarity.

“We have seen a new visual where we have seen MS Dhoni keeping the wickets. This never happens, this is something new for me because I have played cricket for so many years with him, whether it is for the Indian team or in the league with CSK, I have never seen him keeping wickets.

“So this is because he has not played cricket for a long time. I guess there was some leg-spinner bowling, so he may be trying to check the new bowlers but it is good to see that he is keeping during practice,” Irfan Pathan said.