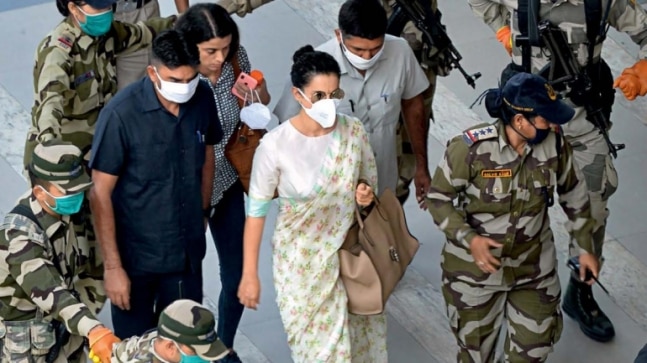 January 24 saw the release of the Kangana Ranaut-starring Panga. It sank without a trace. The panga that got more views came on June 16, when she put out a video in which she held “the movie mafia” responsible for the death of actor Sushant Singh Rajput two days earlier. And so began Ranaut’s rise as a crusader in the ‘justice for Sushant’ movement, influencing the narrative around the case in the news and on social media. While her ire was initially reserved for what she derisively calls ‘Bullywood’, her list of targets expanded as the investigation continued, even including two powerful groups in Maharashtra: the Mumbai Police and the Shiv Sena. In her newfound role as a socio-political commentator on a range of issues from the Ram Mandir to reservations, Ranaut has been as brazen and feisty as always. The sense of persecution remains, but there’s also a flashy braggadocio on display. “I admire her guts,” says producer Ashoke Pandit, one of the few from the industry to support the actress on September 9 when the BMC (Brihanmumbai Municipal Corporation) demolished part of her office in Mumbai’s Bandra, alleging illegal alterations to the structure. “She takes on people and issues… You may not agree [with her], but that doesn’t mean you negate and demean her. She has the right to speak out against people who have humiliated and exploited her,” he says.

Ranaut has a long list of perceived enemies, and it grows by the day. The past three months have seen her calling out many film industry figures, whether for their ‘silence’ over Rajput’s death or as enablers and beneficiaries of nepotism, as she sees it. Many of her choicest remarks were aimed at her favourite worst enemy, Karan Johar. Others singled out included Mahesh Bhatt, Aditya Chopra, Deepika Padukone, Alia Bhatt, Taapsee Pannu, Ayushmann Khurrana, Ranveer Singh, Ranbir Kapoor, Ayan Mukerji and Vicky Kaushal. Not too many have retaliated. “The problem with the film industry is that everyone thinks speaking against her is speaking against the central government,” says journalist-turned-filmmaker Vinod Kapri. “This is a spineless industry. They don’t want to get into controversies. Everyone is thinking about their interests. Bas paisa bana rahe aur PM ke saath selfie kheenchne ka mauka milta rahe (They just want to ensure the money keeps flowing and opportuni­ties to take selfies with the PM keep coming),” he says. Among the few who responded, albeit without naming Ranaut, was Pannu who answered accusations of ganging up on Kangana by tweeting a quote that read, in part: ‘Don’t let bitter, unhappy people drag you down to their level. Use their behaviour as an example of how not to behave and be grateful you are nothing like them.’

For some, Ranaut’s recent statements suggest a future career in politics. Replace the chair in her videos with a podium and a mike, and they could pass for a campaign speech. Ranaut, though, has denied any such ambition. On Twitter, she said she had twice turned down a ticket from the BJP and that her popularity and “yearly income is far more than many successful ministers and politicians”. Politics runs in the family, though. The actress said her grandfather was a Congress MLA for three consecutive terms, and that her “family is so popular in politics back home that after Gangster [her debut film], I got offers almost every year from the Congress”. She also maintains that she isn’t a “BJP stooge” just because she is a vocal supporter of Prime Minister Narendra Modi.

One point on which she does align with the ruling party is spearheading the cause of nationalism. When Ranaut officially joined Twitter on August 21, after having a team run the account on her behalf, she wrote that the sole purpose of her joining the platform, which she had derided after her sister-manager Rangoli Chandel’s account was blocked earlier this year, was “rashtravaad, rashtravaad, rashtravaad”. Ranaut’s film slate reflects this image. Sharing a first look of her upcoming film, Tejas, in which she plays a fighter pilot in the IAF (Indian Air Force), Ranaut said, “I hope we instil a sense of patriotism and pride in the youth of today with this movie.” Her second film as director, and the first under her banner, Manikarnika Films, is a project on Ayodhya. Written by K.V. Vijayendra Prasad of Baahubali fame, Ranaut said the film, Aparajitha Ayodhya, spans six centuries and will feature the laying of the foundation of the Ram Mandir. It has “several real Muslim characters that fought in favour of the Ram temple”, she told Pinkvilla. “It’s a story of devotion, faith and, above all, unity in the country.” Her other projects include Thalaivi, a biopic on actress-turned-politician and former Tamil Nadu CM Jayalalithaa, for which she has reportedly been paid a whopping Rs 24 crore, and Dhaakad, which showcases her as a gun-toting action heroine.

By defaming the industry that made her a star, one may think Ranaut risks burning bridges, though it doesn’t seem to have hurt her celebrity. One industry professional who publicly acknowledged that he refused a film because it starred her is cinematographer P.C. Sreeram. He recently took to Twitter, writing, ‘Deep down I felt uneasy. [I] explained my stand to the makers and they were understanding. Sometimes it’s only [about] what feels right.’ The industry grapevine says that other senior professionals have also expressed reservations about working with her. Naseeruddin Shah took a veiled dig at Ranaut’s cause célèbre, Sushant’s ‘murder’ by the movie mafia. “Every person who has any little frustration about the commercial industry, has been vomiting it out to the press. It is absolutely disgusting,” he said to India Today TV. “No one is interested in the opinions of some half-educated starlet who decides to take it upon herself to get justice for Sushant.” But the film industry, by and large, remains tight-lipped about Ranaut’s video tirades and acerbic tweets.

For her part, Ranaut insists that she is nothing like her peers: she is an outsider who worked her way up, with many heartbreaks and flops on the way, becoming a bona fide star. That she has done so without leaning on leading male stars is a fact that she takes pride in. With solo hits such as Tanu Weds Manu, Tanu Weds Manu Returns, Queen and Manikarnika to her credit, Ranaut is one of the highest-paid actresses in the industry. Not everything she touches turns to gold, but even her failures make headlines, given her proclivity to speak her mind. At a song launch for Judgementall Hai Kya, she accused a journalist of “doing a smear campaign” against her, and during promotions for Simran, she launched an offensive against “silly ex” Hrithik Roshan, after he denied having been in a relationship with her and filed a criminal case.

Madhur Bhandarkar, who directed her in Fashion, the first of her three National Award-winning performances, says she is “fearless” and “speaks her mind”. “She has always taken [on] challenges,” he adds. “She is a terrific actor and has been extremely confident in a good way about herself and her craft.” That is why Ranaut remains unfazed as she continues to make new enemies. “She doesn’t need anybody to give her work,” says Pandit. “When she announces a film, it sells. She doesn’t need stars or studios to work with her. She is a brand now, and knows that.”

If Bollywood was a soft target, messing with authorities governing a state is a tougher act to pull off. Ranaut’s tirade against the Maharashtra government began with her welcoming the CBI takeover of the Rajput case and then criticising the Mumbai Police for a botched investigation. When she voluntee­red to give information on the nexus between Bollywood and the drug mafia provided she was given protection, she refused the service of the Mumbai Police, writing on Twitter, ‘I am actually more scared of [the] Mumbai Police now than movie mafia goons… I would need security either from [the Himachal Pradesh] government or from the Centre.’ Rajya Sabha MP and Shiv Sena leader Sanjay Raut retaliated by saying she could stay put in Himachal if she didn’t feel safe in Mumbai. Ranaut replied with, ‘Why is Mumbai feeling like Pakistan-occupied Kashmir?’ And so the Kangana-Shiv Sena battle began. Ranaut went on to compare Sena rule to that of the Taliban. The next day, it was “Sonia Sena”. In the process, she got what she wanted, the Union home ministry granted her Y-plus security cover. It prompted actress Kubbra Sait to ask, ‘Just checking, is [the cost of Kangana’s security] going out [of] my taxes?’

Still, Ranaut marches on. The speed with which the BMC went about demolishing her property has only given her more credibility in playing the victim and a greater ability to rally support. Professing her love for Maharashtra, she compared her valour to that of Rani Laxmibai. She may deny having political ambition but her actions show she knows how to play the game. On her return to Mumbai, Ranaut equated the partial demolition of her office bungalow to Babur’s attack on the Ram temple. Tweets with images of Sena-led BMC officials outside her office were captioned as ‘Babur and his army’ and one showing the office wreckage as ‘Pakistan’ with #deathofdemocracy to give it added punch. The episode has not only emboldened her, for instance, leading her to address Maharashtra chief minister Uddhav Thackeray in a video as “tujhe”, but also inspired her. Ranaut said that she will now also produce a film on the plight of the Kashmiri Pandits, saying that after her run-in with the BMC, she felt the way they did after losing their homes.

It’s apparent that Ranaut has tur­ned her cause into a battle between the left and the right. In which she is always right. She has a stage, an audience and fans aplenty. She has said that before she bids adieu to films, she wants to “add one blockbuster” which surpasses her highest grossing film so far. Until then, she’s relishing playing the role that comes naturally to her: being her outspoken self. It won’t get her a National Award but it’s certainly getting her attention, the real drug of choice of the stars.