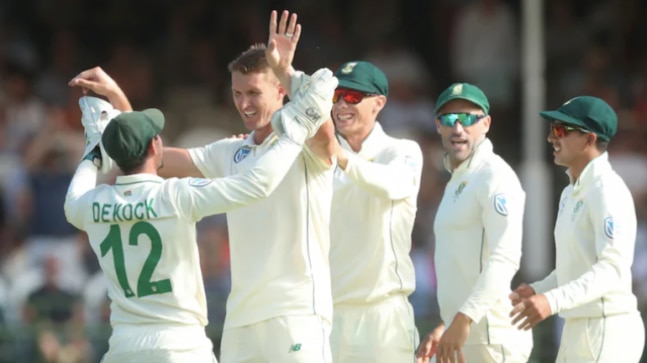 South Africa cricket team’s head coach Mark Boucher has promised a ‘meaningful gesture’ against racism from the players after the interim board’s statement.

The Cricket South Africa (CSA) interim board, earlier this week, had released a statement expressing an outcry over the cricketers’ response to the Black Lives Matter (BLM) movement. Last month, head coach Mark Boucher had said that “we have done what we needed to do” against racism.

By that, Boucher pointed at the 3TC tournament in July wherein all players and members of staff involved took a knee. The national men’s team had refused to do so during the home series against England. However, CSA displayed a banner saying: “We stand in solidarity against racism and gender-based violence” at Newlands during two T20Is of the 3-match home series against England.

With Sri Lanka touring the nation, South Africa head coach Mark Boucher has now promised a ‘meaningful gesture’ against racism from the cricketers after the interim board’s statement.

“We appreciate the board isn’t looking to compel the team into doing anything one way or the other, and that they are happy to allow the team to go through their process and come up with something meaningful to them. We are happy to engage further with them and what they would like to discuss at a more appropriate time,” Mark Boucher told an online press conference on Thursday, as quoted by Cricbuzz.

“We’ve had a lot of discussions since we’ve come into the bubble about this, especially after the board statement. The guys have come up with a meaningful gesture and you will see that. That’s something the players will share with everyone before match day.”

South Africa are set to host Sri Lanka for a 2-match Test series from December 26 to January 7 with the Boxing Day Test in Centurion.