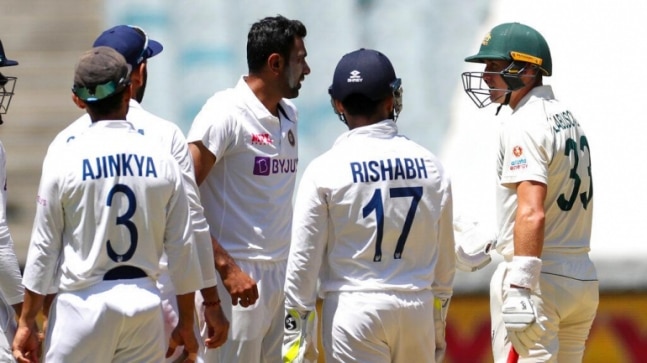 India went into the break at Lunch in the driver’s seat as they had Australia in a spot of bother at 65 for 3. Jasprit Bumrah got the early breakthrough for India getting opener Joe Burns out for 0 as early as the 5th over with a beauty that just left the right-hander.

Instead of going to the debutant fast bowler in Mohammed Siraj as the first change, Ajinkya Rahane brought in his off-spinner R Ashwin as the first change as early as the 11th over. It was a surprise call but Rahane had pointed out at the toss there was a bit of moisture on the grass-rich MCG wicket in the morning.

R Ashwin repaid the faith his captain had in him by picking up the wickets of Matthew Wade and Steve Smith. While Wade tried a shocking shot while coming down the wicket, Smith was set-up brilliantly as he edged one to the leg-gully on 0.

Rahane made sure India bowled 13 overs of spin out of the total 27 bowled in the morning session as he got Ravindra Jadeja to bowl in tandem with Ashwin before the break. Ashwin nearly had another one but a good DRS call from Marnus Labuschagne helped the Australia star survive an on-field LBW decision in the final over of the 1st session.

“I thought Rahane did a good job. Backed his bowlers. He had four slips and a gully at one point. Once Smith came out, he kept the pressure by bringing back Bumrah. I thought his captaincy has been very good,” Glenn McGrath told Sony Six.

Meanwhile, former India batsman Ajay Jadeja pointed out that India’s bowling did not follow a set pattern and Ajinkya Rahane got the rewards for his decision-making in the first session of the 2nd Test.

“It was obvious that he started with Bumrah. But when Ashwin got Smith, it was interesting to see Rahane carrying on to attack. Generally, you see India’s bowling attacks have a pattern, but today, there was not a pattern. Normally, on the first day of a Test match, you don’t normally see 9 overs (13) from spinners. It wasn’t just from one end, it was from the other end. He preferred his spinners to use the moisture that existed before lunch. That’s a call he made and it was successful,” Jadeja said.

As Allan Border pointed out, it was a good fightback from India after the horrors of the Adelaide Test wherein the visitors were bundled out for 36 in the 2nd session before succumbing to an 8-wicket defeat.