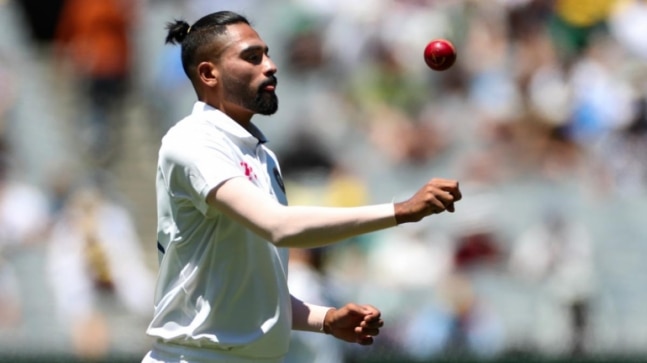 Mohammed Siraj made his India debut in the Boxing Day Test against Australia. (AP Photo)

Royal Challengers Bangalore pacer Mohammed Siraj made his India debut in the Boxing Day Test against Australia at the iconic Melbourne Cricket Ground on Saturday, and former Australia captain Ricky Ponting said that he looked very much like a Test match bowler.

Siraj, who replaced the injured Mohammed Shami, became the 298th player to represent India in the Test format.

“I have liked his aggression, he has been willing to use the short-ball. But the thing that I liked in the lead upto (Cameron) Green’s wicket and even when Tim Paine came to the crease, around the 55-60 over-mark, the ball started to swing.

“He is a noted new ball bowler and has done really well in domestic cricket in India with the brand new ball, and I thought he might have his challenges here once the ball got a little bit older, but he has bowled really well,” Ricky Ponting said in a video released by cricket.com.au.

Debutant Mohammed Siraj had a successful day as he finished with 2-40. He dismissed Marnus Labuschagne to get his maiden Test wicket and followed it up with the wicket of Cameron Green.

Ricky Ponting said that he looked a better bowler compared to Umesh Yadav on Saturday.

“His (Siraj’s) wrist points have been good, his length has been good. He has had a lot of LBW shouts, obviously the wicket of Green, but he also had another review against Tim Paine, the ball was hitting the top of the stumps.

“So, he has looked very much a Test match bowler, in fact, looking at him today he has looked a better bowler than Umesh Yadav. It is a really good sign with him and Navdeep Saini in the squad for India. India have again been able to find some promising fast bowlers,” Ponting added.

Siraj earned his spot in the team based on his performance for the Royal Challengers Bangalore in IPL 2020 where took 11 wickets in 9 matches at an average of 21.45. He was added to the Indian team for the Australian tour along with RCB team-mate Navdeep Saini.