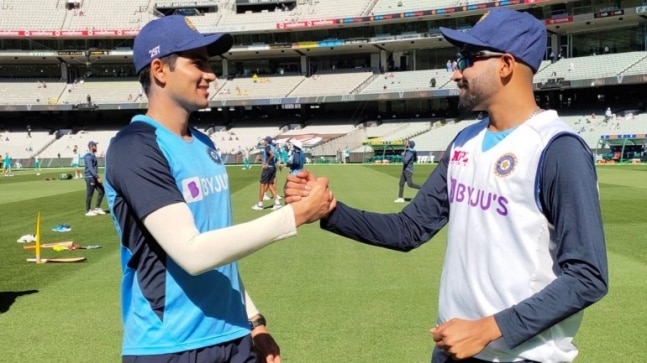 Mohammed Siraj, who replaced the injured Mohammed Shami, became the 298th player to represent India in the Test format on Sunday when he made his debut against Australia.

Shubman Gill and Mohammed Siraj made their Test debut on Saturday. (Courtesy of BCCI)

Young fast bowler Mohammed Siraj made his India Test debut in the Boxing Day Test against Australia at the iconic Melbourne Cricket Ground on Saturday.

He was presented his Test cap by India spinner Ravichandran Ashwin, who also gave a nice short speech that was cheered on by the rest of the team-mates. Ashwin in his speech lauded Siraj for going through the grind of domestic cricket and said that he earned this place and the opportunity to represent India.

“Coming through First-Class grind and India A grind, you have earned this Test cap. You will rally around with the team throughout this Test match,” Ashwin said in a speech that was cheered on by his team-mates.

Mohammed Siraj, who replaced the injured Mohammed Shami, became the 298th player to represent India in the Test format. He earned his spot in the team based on his performance for the Royal Challengers Bangalore in IPL 2020 where took 11 wickets in 9 matches at an average of 21.45. He was added to the Indian team for the Australian tour along with RCB team-mate Navdeep Saini.

Another player who made his debut for India on Saturday was the talented batsman Shubman Gill. He was presented his Test cap by coach Ravi Shastri.

Usually a player of prominence presents the Test cap to a youngster to inspire them to do well, but with the protocols regarding Covid-19, of late, a senior member from the team has been seen doing the honours.

It has been a while since India had two debutants playing a Test match for the country. The last time India played with multiple debutants was in 2013 against West Indies at Kolkata with Rohit Sharma and Mohammed Shami being the debutants.

India made four changes for the second Test in MCG. Apart from Gill and Siraj, Ravindra Jadeja and Rishabh Pant too made their come backs to the Indian side.