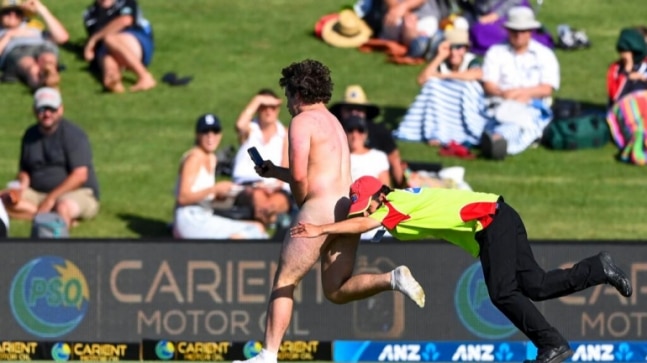 On Day 1 of the first Test between New Zealand and Pakistan, a streaker invaded the ground, disrupting the match for a few minutes.

The Boxing Day Test between New Zealand and Pakistan saw some great battles between the bat and ball on Day 1 but the incident of an streaker invading the ground is also being talked about a lot. The play stopped for a brief moment at Bay Oval in Mount Maunganui, when a streaker came running to the pitch with his hands on his private part.

A security guard tried to stop the person but he continued obstructing the game. Finally, he was tackled by one of the security guards before being escorted out of the field. While, some fans are blaming the streaker for wasting time and restricting Kane Williamson from reaching to his 23rd hundred on Day 1 of the Test match itself, others have raised questions on the “fitness” of the security guards.

Notably, Kane Williamson was unbeaten on 94 when stumps was called on Day 1. Here’s the video of the incident.

Here is how fans reacted to the incident:

That streaker might hv just prevented KW from getting his century today!! #NZvsPAK #Cricket

Poor form from a streaker to go when the home side is batting. Know the game man. #NZvsPAK

Early defence was poor from security, showed no fitness or form and the streaker was able to penetrate with relative ease.

Talking about the match, Pakistan lost momentum after taking 2 quick wickets in the match as Kane Williamson and Ross Taylor partenered for 120 runs for the third wicket. Once Taylor departed after scoring 70, Henry Nicholls stitched another partnership with captain Williamson, helping the Black Caps end Day 1 on 222 for 3.