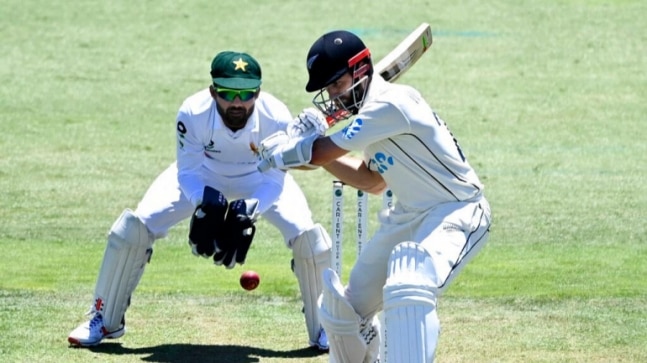 New Zealand captain Kane Williamson led from the front as the hosts ended Day 1 at 222 for 3 after losing two quick wickets at Bay Oval in Mount Maunganui.

Pakistan would have definitely fancied their chance of ending the Day 1 of the first Test match agaisnt New Zealand at Mount Maunganui on high after dismissing both their openers with just 13 runs on the board but Kane Williamson showed why he is one of the most dangerous batsman going around in the world.

After Tom Latham (4) and Tom Blundell (5) departed, captain Kane Williamson joined forces with Ross Taylor to add 120 vital runs for the 3rd wicket. In innings full of class, the two gun batsmen gave no chances to the visitors to bounceback in the match.

Williamson and Taylor had played 281 balls together when the latter edged a Shaheen Afridi delivery to stand-in captain Mohammad Rizwan. The wicket was Afridi’s third scalp of the day. Henry Nicholls, who had scored 174 runs against West Indies in his last Test outing, was the next to join his captain.

New Zealand lost no further wicket on the starting day as Nicholls (42*) and Williamson (94*) batted handsomely and ended up accumulating 89 runs before stumps was called by the umpires.