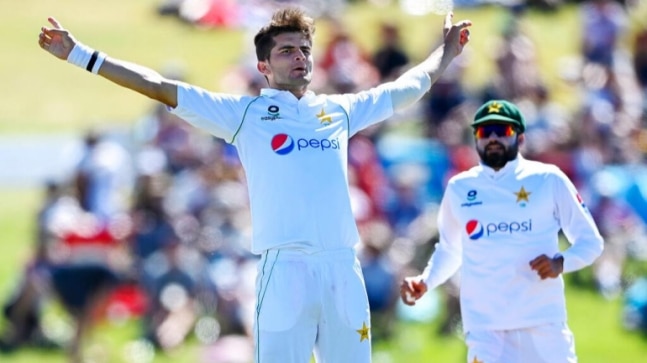 Pakistan tour of New Zealand: Ross Taylor predicts a bright future for Pakistan ahead in Test cricket with the brilliance of pacer Shaheen Shah Afridi in the team.

The Boxing Day, like every other year, brings to fans the best of Test cricket as it did this time. Even amid the coronavirus-hit 2020, the opening day of Boxing Day Test matches lived up to the expectation be it the match between India and Australia or the one between New Zealand and Pakistan.

Pakistan skipper Mohammad Rizwan won the toss and opted to bat first in the 1st Test as Shaheen Shah Afridi justified the decision with the early dismissals of openers Tom Latham and Tom Blundell. It was the 120-run 3rd wicket partnership between Kane Williamson (94 not out) and Ross Taylor (70) that helped New Zealand stabilise once again.

After Day 1’s play, as NZ were on 222/3, Taylor was all praise about Pakistan’s bowling, spearheaded by Shaheen Afridi, on at Mount Maunganui on Saturday. Taylor was later dismissed on 70 by Shaheen, who claimed figures of 3/55 on Day 1.

“It was difficult early on but you expect that on a day one pitch. It had definitely flattened out, later on. The wicket was probably a bit two-paced at times. So it will be interesting, it will get bit uneven in the next couple of days. The way Kane and I go through that, it was nice and pleasing. You have to give it to Shaheen, he bowled outstandingly well. Mohammad Abbas also didn’t really give us much,” said Taylor in the post-match press conference.

“Shaheen Shah Afridi is only going to get better and he will enjoy this wicket and the one in Christchurch as well. I think Pakistan is going to see a very good bowler in years to come. Pakistan bowled with more discipline than West Indies and bowled in the right areas for a lot longer. West Indies did bowl well at times but weren’t as consistent as this lot,” he added.