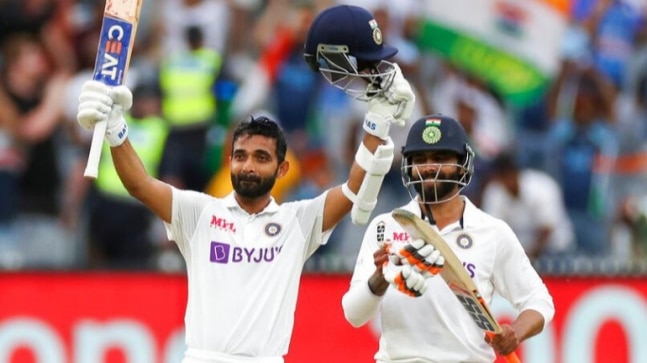 Australia vs India: Ajinkya Rahane became only the fifth India captian to hit a hundred against Australia in Australia as the stand-in skipper showed his class with the Boxing Day Test hundred at MCG on Sunday.

Ajinkya Rahane’s continued his love affair with the Melbourne Cricket Ground continued as India’s stand-in captain played one of the most memorable knocks by an Indian batsman Down Under. Rahane remained unbeaten on 104 at Stumps on Day 2 as India finished on top with an 82-run lead.

With his 12th Test hundred, Ajinkya Rahane became only the 2nd Indian batsman after the great Vinoo Mankad to hit more than one hundred at the Melbourne Cricket Ground. Rahane had hit an attacking hundred in 2014 at the MCG and had to wait 6 more years for his 2nd 3-figure score in Australia.

There are a few more numbers. Rahane also became only the 5th Indian captain after Tendulkar (1999), Mohammad Azharuddin (1991/92), Sourav Ganguly (2003/04) and Virat Kohli to hit a hundred in Australia. Notably, Kohli remains the only man to score more than 1 hundred as India captain Down Under.

It was a special knock in every sense as India and Rahane were under considerable pressure. Rahane’s last overseas hundred had come in 2017 and India were heading into the Boxing Day Test on the back of the Adelaide horror wherein they were bowled out for their lowest Test score for 36.

India were without Virat Kohli who had headed home on paternity leave. Rahane had come into the Test after an ordinary personal show in Adelaide. Rahane had run out Kohli in the first innings of the Adelaide Test, triggering an Indian collapse and got out for 0 in the second innings low.

However, Rahane was able to put behind the memories of the poor Adelaide Test and showcased grit and determination to hit a classy hundred. He was brilliant with his tactics on the field on Saturday as he marshaled his troops well as India bowled Australia out for 195.

Rahane got to the hundred in 195 balls as he stitched fifty-plus stands with Hanuma Vihari, Rishabh Pant and Ravindra Jadeja.

Rahane came up with a muted but heartwarming celebration as he looked towards the sky, raising his bat as he stood at the middle of the MCG wicket and took in all the accolades that were coming in his way. Rahane’s gritty 104 not out and Jadeja’s 40 not out put India in the driver’s seat as India finished Day 2 with an 82-run lead.