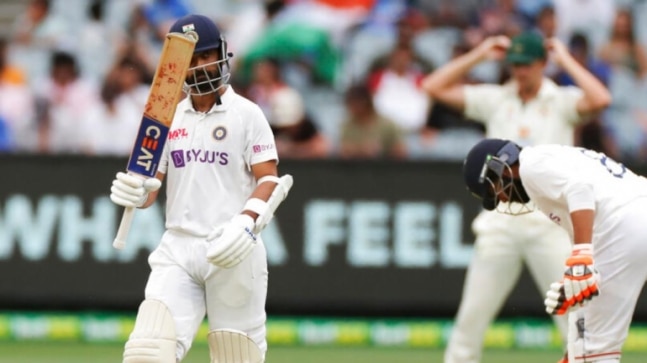 Captain Ajinkya Rahane showed character and led from the front to complete his very classy 12th Test hundred. The 104-run unbeaten partnership between him and Ravindra Jadeja has given a solid first innings lead of 84 already.

All eyes were on Ajinkya Rahane as he headed into the Boxing Day Test as the stand-in captain after the Adelaide horror. Rahane was involved in a mix-up that saw Virat Kohli get run-out — an incident that changed the narrative of the game in the 1st Test of the Border-Gavaskar series. He got out for 0 during the 36-all out episode that came as a big blow to the visiting team’s morale.

However, Ajinkya Rahane showcased grit and character as the stand-in captain stepped up with a memorable hundred on Day 2 of the ongoing Boxing Day Test at the Melbourne Cricket Ground. Rahane got to the 3-figure score in 195 balls as he showed the world that he still has the fire left in him. There were talks about Virat Kohli’s absence impacting India’s batting but Rahane led from the front in Melbourne and came up with a masterclass.

This was Ajinkya Rahane’s 12th Test hundred and his first since South Africa in October 2019. It’s also the first time he has scored a hundred away from home since the 132 against Sri Lanka in Colombo in October 2017. This is also only his second hundred in Australia after the 2014 masterclass at the Melbourne Cricket Ground, which is proving to be a happy hunting ground for the Mumbai batsman.

It was seen as a make-or-break series for Rahane who had struggled to get the big scores that he was known for in the recent past. However, there was everything that one could ask for in the MCG masterclass as he mixed aggression with caution wonderfully well to take India to a position of strength.

Rahane stitched three fifty-plus stands — one with Hanuma Vihari (21), Rishabh Pant (29) and Ravindra Jadeja with whom he put up a dominant 6th-wicket stand. While he was cautious in the first session when Pat Cummins was being unplayable, Rahane opened up slowly when batting with Pant, who swung the momentum in favour of India.

Rahane and Jadeja paced their partnership wonderfully well. The two batsmen were cautious and made sure India did not lose a wicket before the 2nd new ball was taken. However, Australia wasted the red cherry by spraying it all around and Rahane and Jadeja made full use of it.