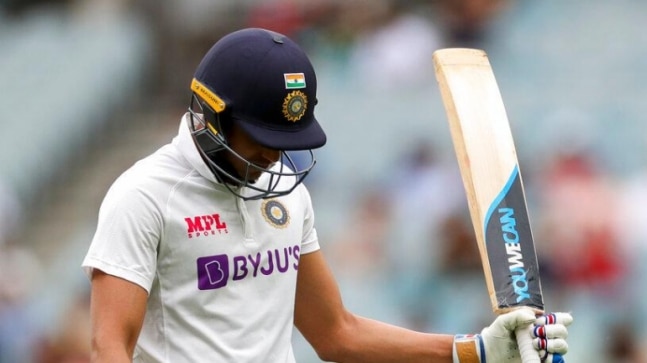 21-year-old Shubman Gill is now a India Test player, owning the cap number 297. The dashing right-hander played a fidgety but handy 45-run knock against Australia in his maiden Test innings. Even before facing his first ball in Test cricket, the batsman saw his opening partner Mayank Agarwal depart for a duck in the Boxing Day Test at the Melbourne Cricket Ground (MCG) on Saturday.

The new red ball was seaming, swinging and bouncing and two very experienced and lethal pacers Mitchell Starc and Pat Cummins were bowling their heart out. Gill opened his account with a boundary but looked out of place initially. The Punjab batsman successfully ended the Day 1 on an unbeaten note, expressing his satisfaction with a smile on his face.

On Sunday, he added 17 more runs to his overnight individual score of 28. On the final ball of the 22nd over, Gill got tempted to commit to a Pat Cummins delivery bowled around the 4th stump but ended up giving a regulation catch to wicketkeeper Tim Paine. Shubman Gill looked gutted after the dismissal.

In the press match conference after the end of Day 2, Shubman Gill confirmed that he was sad because of the fashion in which he got out. Gill said he was successful in his quest to play with intent and build partnership when needed but the way he got out has left him unsatisfied.

“Not really satisfied with the way I got out. It was the last ball of Pat Cummins’ spell and I should have navigated through it. It was a loose shot to play at that moment. But my overall goal of playing with intent, building partnerships if an early wicket falls, was executed nicely to some extent. But I felt bad for the way I got out,” Gill said.

“The ball was moving when I came. The only things which I said to myself was that no matter is happening on the pitch or around me, I should play and express myself. Playing with intent was my thought process,” the debutant said while talking about his plans for his maiden Test innings.

Further, Shubman Gill said that facing the likes of Jasprit Bumrah, Mohammed Shami, Ishant Sharma and Umesh Yadav in the nets helped him in tackling the heat of facing world class pacers like Starc and Cummins in his debut Test. He added that travelling with the India Test squad in the past has helped him in not feeling “in a whole new place”.

“I have been travelling with the team for the last four-five Test series, and being with the team has helped me a lot,” Gill said. “To be able to settle in the team. I have been doing all my net sessions and practice sessions and to be able to play someone like Boom [Jasprit Bumrah], [Mohammed] Shami bhai, Umesh [Yadav] bhai and Ishant [Sharma] bhai in the nets, it’s a huge confidence booster for a youngster. To be playing a top bowling attack in the nets. When you go out in a match, like when I went out to bat today, I didn’t feel like I am in a whole new place. It didn’t feel like a completely different level.”