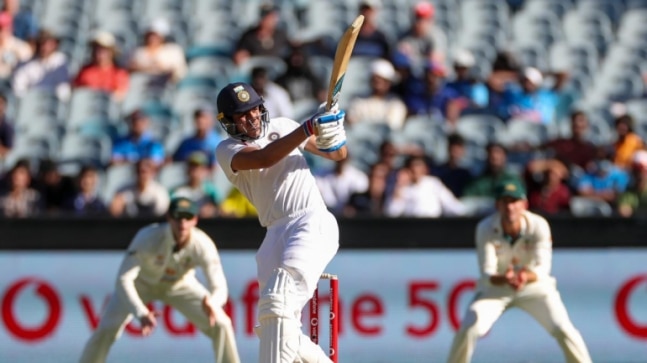 India vs Australia, 2nd Test: Shubman Gill rode his luck before getting dismissed on 45 on Day two of the Boxing Day Test against Australia. This is the third-highest score by an Indian debutant in Australia.

Indian opener Shubman Gill on Sunday became the country’s third-highest run-scorer on Test debut in Australia when he scored 45 runs on Day two of the ongoing ‘Boxing Day Test’.

Gill was given an opportunity in the second Test against Australia after Prithvi Shaw fared poorly in the first Test in Adelaide. Gill smashed eight boundaries during his 65 ball knock, registering a dominant performance against a formidable bowling attack, despite the early dismissal of fellow opener Mayank Agarwal.

Gill’s opening partner Agarwal holds the record of highest run-scorer for India on Test debut in Australia. Agarwal had scored 76 runs on their debut against Australia in 2018. Dattu Phadkar, who had scored 51 runs on his debut in Sydney, back in December 1947 is second on the list.

Gill’s lucky run at the crease continued as the India opener was dropped twice during his 65-ball knock. Gill got an early reprieve on 4 when Marnus Labuschagne dropped a regulation catch at slip on Day 1 and then again on Tim Paine failed to hold onto a relatively each catch behind the stumps when the Indian debutant’s score read 28.

However, Gill fell short of a fifty on debut as Pat Cummins gave Australia the first breakthrough on Day 2 at the MCG. Gill and Cheteshwar Pujara took India past 50 before Cummins dismissed the duo.

Earlier, India proved there is life without captain Virat Kohli as they bowled Australia out for 195 then weathered a fierce pace assault in the late afternoon to dominate the opening day of the second Test in Melbourne.