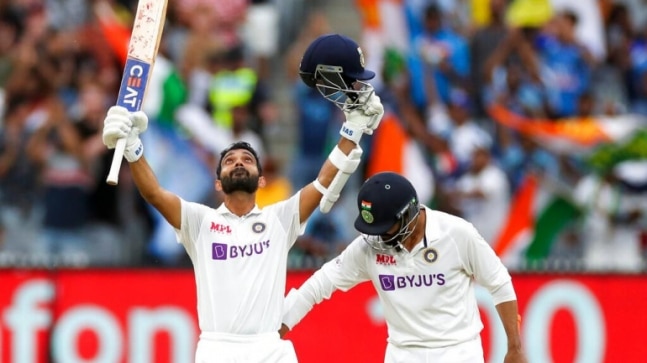 Rahane showed character and led from the front as he stamped his authority with an unbeaten 104 at the Melbourne Cricket Ground, driving India to 277 for five before rain brought stumps early.

The highlight of the day was the continuous partnerships between Ajinkya Rahane and his very able partners, who joined him in different phases of the game. Rahane had pulled the visitors from early peril on a muggy, overcast day and with Ravindra Jadeja (40 not out) built a 104-run partnership that spanned the final session.

“Here, India were under pressure 0-1 down, the pitch had something in it and he was the captain, additional responsibility, the quality of the bowling attack, looking at all those parameters, this could Ajinkya Rahane’s best Test hundred,” Manjrekar added.

“Terrific innings, it was an innings of quiet resolve. I love people who step up with so much to prove. He has got some critics now but when he gets a hundred, that’s what he does, no histrionics, quietly raises the bat,” Majrekar further said.

“He seems to be very composed, the opposite of Virat Kohli who shows his animated shows his emotions. Each to their won,” Glenn McGrath told Sony Six.

“Interesting comparison, this innings was similar to Kane Williamson… they say he plays the ball late. When you look at Rahane’s innings today, he had so much time today, he waited for the bad balls. Solid in defense. Once he got into the innings, he stitched partnership. With Jadeja, he was into his innings. It was a brilliant inning,” McGrath added.