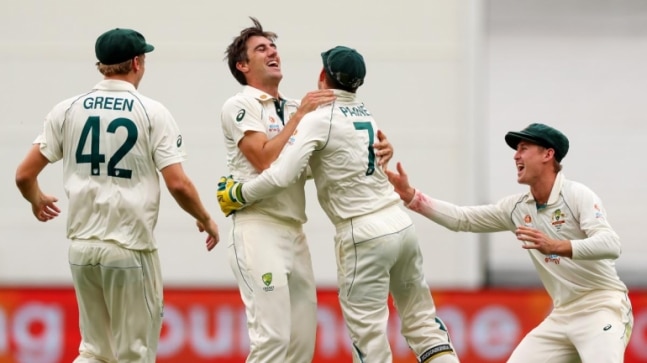 India vs Australia, 2nd Test: Tim Paine grabbed a brilliant one-handed catch to dismiss Cheteshwar Pujara for 17 and keep the Boxing Day Test against India in balance on Day 2 in Melbourne.

Australia skipper Tim Paine came up with an excellent effort behind the stumps to end Cheteshwar Pujara’s resistance on Day 2 of the Boxing Day Test vs India just two overs after dropping a regulation catch of Shubman Gill.

Pujara had weathered the early storm and was batting on 17 off 69 deliveries when Pat Cummins produced a brilliant delivery to break his resolute defense. Cummins coaxed a thick edge from Pujara as the red ball went flying low towards the slips cordon.

Diving low to his right, Paine had to snaffle the ball in one glove as the thick edge would not have carried to Matthew Wade at first-slip. Paine’s one-handed stunner to remove Pujara sent social media into a frenzy. The fans were left in awe of the catch that will surely be replayed for the rest of the summer.

A pearler of a pluck from Paine! And it’s the big wicket of Pujara too!@hcltech | #AUSvIND pic.twitter.com/q4rFhCb7Yj

“He has restored pride in the Australian side”#AUSvsIND

Pujara got the ball that will always get him out. A superb catch by Tim Paine.

Earlier, Cummins denied debutant Shubman Gill a half-century before dismissing Pujara for 17 in a fiery five-ball burst in the morning session on Day 2. Stand-in captain Ajinkya Rahane and Hanuma Vihari managed to steady India after exit of Pujara and Gill in quick succession.

Mitchell Starc had trapped Mayank Agarwal lbw for a duck on Saturday evening to end the first over of India’s innings. Pujara and Gill resumed with India 36 for one and held firm before Cummins finally broke their 61-run partnership. Cummins’ fiery spell left the Boxing Day Test evenly poised after Indian bowlers produced a superlative effort to bundle out Australia for 195 on Day 1.

Australia lead the Border-Gavaskar series 1-0 after thrashing India by eight wickets within three days in the Day-night Test at Adelaide Oval.