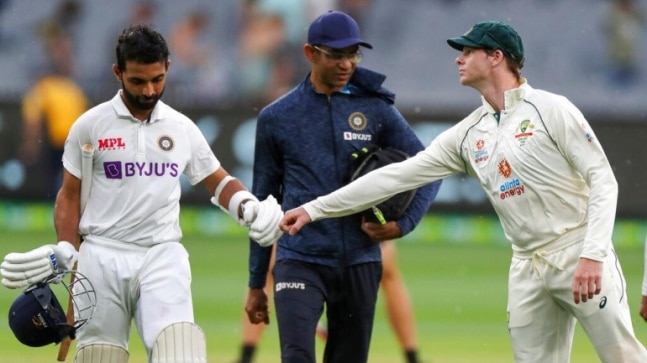 India’s stand-in captain Ajinkya Rahane is the man of the moment currently, the entire world is going gaga over his very classy 12th Test century on Day 2 of the Boxing Day Test against Australia at Melbourne Cricket Ground (MCG) on Sunday. In a true show of character, the 32-year-old batsman built partnerships after partnerships to take India to a position from where they can smell a possible victory now.

Ajinkya Rahane promoted himself to number 4 and walked out in the middle after the departure of young Shubman Gill. But Cheteshwar Pujara departed even before Rahane could get into the groove of things. From there on, it was a test of mental strength for Rahane and he passed it with flying colours.

A 52-run partnership with Hanuma Vihari to bring the innings back on track, then a 57 runs campaign with very positive looking Rishabh Pant and then an unbeaten 104 runs stand with Ravindra Jadeja to take India’s lead to 82 at the end of Day 2 — Ajinkya Rahane anchored each one of them.

Indian batting great Sunil Gavaskar has heaped rich praises on fellow Mumbaikar Rahane and called his innings a fantastic one. Rahane’s unbetaen 104 off 200 balls was a “typical Test match century” according to the Little Master.

“It was a typical Test match century and a typical captain’s innings, showing from the front how to play on a pitch which was never easy to bat on. This is a kind of a pitch where no batsman can say he is well set. There is something or the other happening, there is a lit bit of carry, the odd ball has kept low, there has been turn for Nathan Lyon. So, no batsman can tell to himself even if he is batting on 60-70 that he is well set and he can go on to get runs. Pujara fell after Ajinkya Rahane came to bat. Vihari and him were new,” Sunil Gavaskar told on Sony Networks post Day 2 stumps.

The 71-year-old talked highly of Rishabh Pant’s fluent 40-ball 29, saying that it took the momentum away from the hosts, who are leading the series 2-1.

“Pant’s batting took the momentum away from Australia. His impatience cost him his wicket, else he could have scored another 80 odd today. Rahane’s innings was fantastic, a typical captain’s innings,” he said.

Ajinkya Rahane has taken the charge of Team India in the absence ofregular captain Virat Kohli, who returned back after the first test to attend the birth of his first child. Going into the match, India were under a lot of pressure due to their shambolic performance in the Adelaide Test.