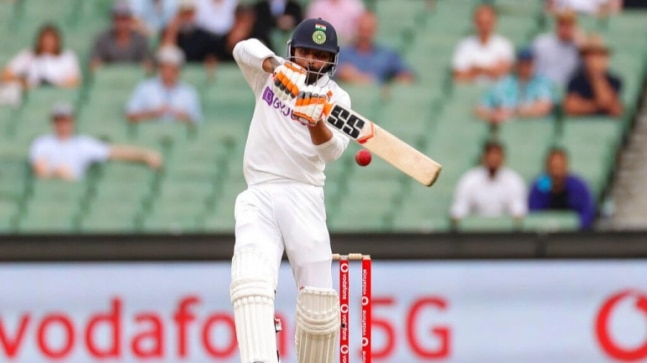 There was a time when a major controvery errupted after cricketer-turned-commentator Sanjay Manjrekar called Ravindra Jadeja, a ‘bits and pieces all-rounder’. Jadeja had literally lost his cool after the comment and blasted the former batsman, acussing him of spreading ‘verbal diarrhea’.

Things have started to mellow down a bit now or may be the star allrounder with his consistent good performances has forced Manjrekar to compliment him every now and then. On Sunday, Day 2 of the ongoing Boxing Day Test match between India and Australia, Ravindra Jadeja stood rock solid with his captain Ajinkya Rahane and stitched a very crucial 104-run partnership for the 6th wicket to take his team’s lead to 82.

Going through the aforementioned statistics, Sanjay Manjrekar has said that Ravindra Jadeja always had the batting abilities and techniques but those have just skyrocketed in the recent years. Manjrekar also pointed out that Jadeja did not throw his wicket to avoid facing the Australian pacers with the new ball.

“Things changed after 2015 with Ravindra Jadeja — the batsman. It was also the time when Ashwin was batting before him, Ashwin had four Test hundreds and Jadeja had nothing. Jadeja was competing with Ashwin as the spinner in side. Ashwin’s batting dropped, Jadeja’s batting sort of skyrocketed. This guy always had a great first-class record and finally when he got his number, he felt ‘Wow, let me make most of it’

“The early part he was playing as Test all-rounder of sort, his bowling was fine but his batting for couple of years had become a bit of harakiri. Something changed in the last 4 years. He is getting behind the ball, leaving balls, even today against a quality bowling attack, he did not throw is wicket to avoid the fast bowlers before the second new ball was taken. He hung in there, so temperamentally, the technique has always been there, batting ability has always been there,” Manjrekar told on Sony Networks.

Overall, Ravindra Jadeja averages 35.26 with the bat and 24.62 with the ball in Test cricket.