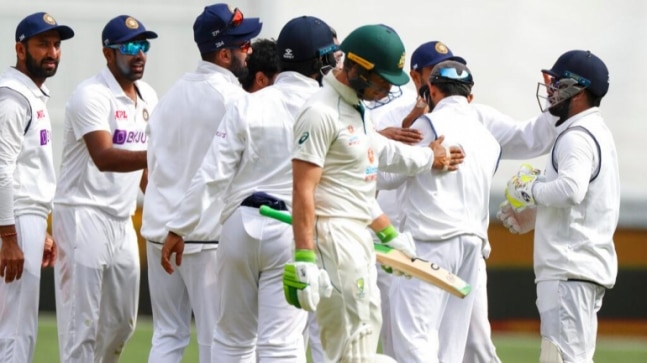 Amid all the DRS controversy surrounding the BBL that’s been going around, Matthew Wade has pointed at the anomaly of decisions using the widely used review system. Australia captain Tim Paine was given out caught behind, off a Ravindra Jadeja delivery, on Day 3 based on India’s review.

Paine fell for the delivery after it turned a little around off stump and tried to play the cut shot but failed to connect. There was a huge appeal from wicketkeeper Rishabh Pant but on-field umpire Paul Reiffel had adjudged it not out. However, Indian skipper Ajinkya Rahane was convinced that Paine had edged it and went for a review anyway.

“From what I’ve seen it looked pretty similar to the first ball of yesterday, the one we actually referred, I think it was off Pujara. So from all reports and what I’ve seen, Snicko showed a very similar thing, one was given out and one was not out. That’s the way the cookie crumbles sometimes, but that’s what it looked like from where we’ve been sitting and watching,” Wade said after play on Day 3.

As it turns out, the hotspot didn’t record anything but 3rd umpire Paul Wilson overturned the on-field decision as the Snicko showed a spike. After Paine was given out, Wade expressed his disappointment over the decision as Indian batsman Cheteshwar Pujara was adjudged not out in a similar kind of situation on Day 2, leading to Australia losing a review, and has questioned the consistency of the review system.

“I heard a noise on the Pujara one, I was at first slip at the time, and his bat was the only thing out there, and then we saw what you guys saw on the ground, which was a small spike. Either way if it was out or not out, consistency is all you want as a player,” he added.