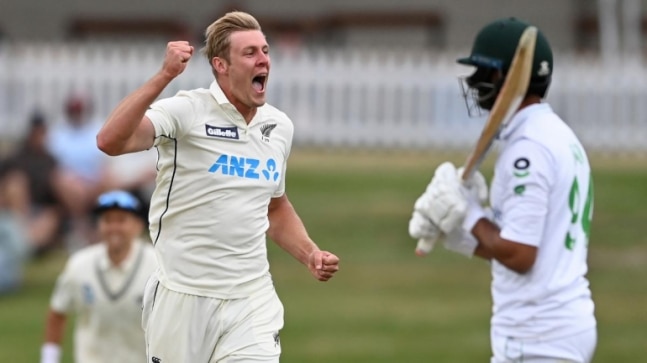 New Zealand bowler Kylie Jamieson led the attack with a splendid 3-35 and was ably supported by Neil Wagner and the others to restrict Pakistan to 239 in the first innings.

Pakistan youngster Faheem Ashraf missed out on his maiden Test hundred but got his team to avoid the follow-on in the first innings against New Zealand at Mount Maunganui.

The New Zealand bowlers were relentless and bowled the visitors out for 239 in the first innings, taking a lead of 192 runs in the first Test.

Kylie Jamieson led the attack with a splendid 3-35 and got the crucial wickets of openers Shan Masood, Abid Ali and Faheem Ashraf.

He was ably supported by Neil Wagner, who continued to bowl despite a fractured toe and took 2-50 on Monday.

Apart from Ashraf, it was the skipper Mohammad Rizwan who fought back with a gritty 71 until he was run-out by Mitchell Santner.

Pakistan were reeling at 80/6 at one stage, but the two batsman fought back with a 107-run partnership until the run-out occurred.

Ashraf then batted with the tail and managed to add 52 runs, and more importantly avoid the follow-on for Pakistan.

Earlier on Day 2, New Zealand skipper Kane Williamson went on to hit his 23rd Test hundred as their innings folded up on 431.

Speaking to the media after Day 2 of the match, Williamson said, “It was really tough. Obviously, the ball was moving around quite a bit and they asked good questions in good areas. It was also quite difficult to score and to get a rhythm scoring – a lot of the partnerships we built were more around time than a flow of runs.”