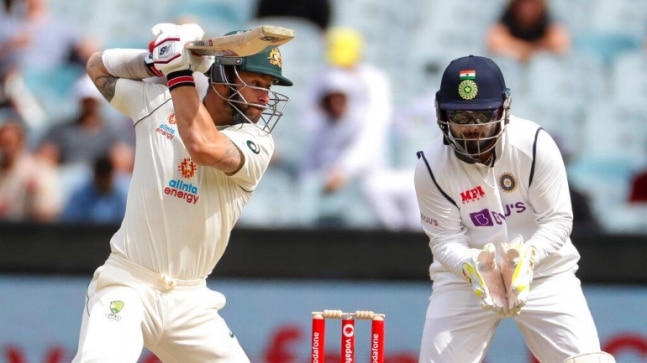 On Day 3 of the Boxing Day Test between India and Australia, Matthew Wade and Rishabh Pant were involved in a couple of banters. During one of the breaks, Wade wondered why Pant keeps on laughing behind the stumps.

There was plenty of drama on Day 3 of the Boxing Day Test between Australia and India at the Melbourne Cricket Ground as more than 10 wickets fell on what lived up to the name of ‘moving day’ of the Test match. From controversial DRS decisions to some brilliant bowling from both sides, India and Australia were jostling to gain the upper hand.

As it turned out, there was some banter between Australia opener Matthew Wade and India wicketkeeper Rishabh Pant during a tense second session. Pant, as usual, was talktative from behind the wickets as he was encouraging the India bowlers constantly throughout the day.

At one point, a visibly frustrated Matthew Wade chirped back at Rishabh Pant, engaging in a bit of banter with the young wicketkeepser. Wade certainly wasn’t impressed with Pant who was giggling whenever the Australia batsmen played and missed or troubled to keep up with the Indian bowling attack.

Speaking to Fox Sports during the Tea break, Wade wondered what was so funny during the proceedings that the Indian wicketkeeper was giggling constantly from behind the wickets. There was a cheeky comment as well.

“He just laughs all the time. He doesn’t really say much, he’s just always laughing at you. I don’t know what’s so funny, it must be my batting,” Wade said.

The two even came face to face with each other at point of time.

On field banters with Australia players is not something new for the young India wicketkeeper. In his side’s last Test tour a couple of years ago, Pant was involved in some hilarious ‘verbal wars’ with captain Tim Paine. The 23-year-old had called Paine a temporary captain, while the latter had very famously asked the Indian to babysit his kids while he goes for a movie with his wife.