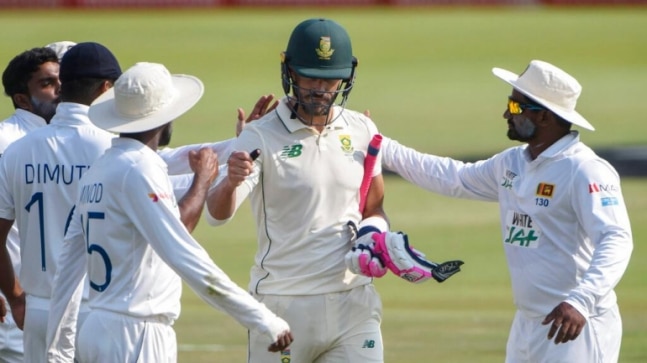 Faf du Plessis patted on the back by Sri Lanka players after dismissal on 199. (AP Photo)

Former South Africa Test captain Faf du Plessis was the centre of force that powered the hosts to a gigantic total of 621, in response Sri Lanka’s 396 in the 1st innings, on Day 3. Du Plessis completed 4000 Test runs, on Monday, while also hitting his 10th hundred in the longest format.

But the 36-year-old had a bittersweet ending to his big day as debutant Wanindu Hasaranga claimed the wicket of du Plessis on 199. The sign of big disappointment was all over du Plessis, who was patted on the back by his opponents, as he left the field after a heartbreaking dismissal. South Africa opener Dean Elgar is also a part of the ominous 199 club in Test cricket.

It was the 7th wicket for South Africa, who had already made it to 600, but the batsmen had done their part in taking the scoreboard reading to 609/7. Vishwa Fernando and Hasaranga wiped off the rest of the tail, as Keshav Maharaj stood out with 73 off 106, taking the final total to 621 all out.

Meanwhile, the injuries of batsman and off-spinner Dhanajaya de Silva and seamer Kasun Rajitha have come as a big blow on Sri Lanka who are already without Angelo Matthews, in the series, and Suranga Lakmal, in the Centurion Test.

While South Africa took a 225-run lead after their 1st innings, Sri Lanka batted 12 overs in the last session of Day 3 with Lungi Ngidi claiming the wickets of captain Dimuth Karunaratne (6) and Kusal Mendis (0) taking the total to 65/2 at the end of Day 3. Sri Lanka, who are likely to bat 9 players, are still trailing by 160 runs with Kusal Perera (33*) and Dinesh Chandimal (21*) unbeaten.