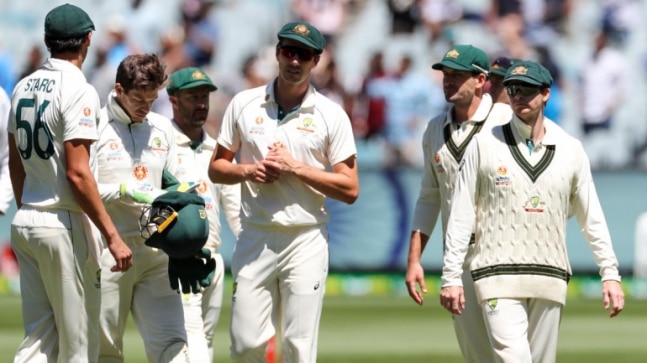 Former India batsman Deep Dasgupta said that the approach towards batting by Australia seems to be very un-Australian as earlier they would look to score over 300 runs in a day but now they were scoring at just 2 runs an over.

On Tuesday, Australia lost by 8 wickets to India in the Boxing Day Test and once again it was their batting that seemed to be an area of concern for the team.

In the four innings that the team has played so far in the series they have not been able to score over 200 runs.

Former India batsman Deep Dasgupta said that the approach towards batting by Australia seems to be very un-Australian. He said that at one time they would look to score over 300 runs in a day, but now they were scoring at just 2 runs an over.

“The whole approach (of Australian batting) has been so un-Australian. We knew that Australian batsman were good of the back-foot, square of the wicket shots against the short-pitch. But they have struggled.

“We knew that they look to score 300 plus runs a day, that is the approach they have towards Test match batting, but you know they are scoring at 2 runs an over. So, the whole approach is very different and that’s where they need to look at how they are approaching their batting,” Deep Dasgupta said on Sports Today YouTube.

Smith is a quality batsman and will bounce back, says Dasgupta

Dasgupta also said that the form of Steve Smith has been a worry for the hosts, but he added that the Australia star is a quality batsman and he will bounce back.

“You were expecting a lot from Steve Smith and Marnus Labuschagne and both of them have had very ordinary series so far. Having said that both of them especially Steve Smith is a quality batsman. He will bounce back,” Dasgupta said.

Steve Smith is going through a bit of a rough patch in the Border-Gavaskar Trophy against India and has only scored 10 runs in 4 innings at an average of 3.33, the lowest average in the Australian camp.

On Monday, he was dismissed by India pacer Jasprit Bumrah for a score of 8 when he was bowled behind his legs. Prior to this Ravichandran Ashwin managed to get him out twice in this Test series, once of the inside edge and once of the outside edge.