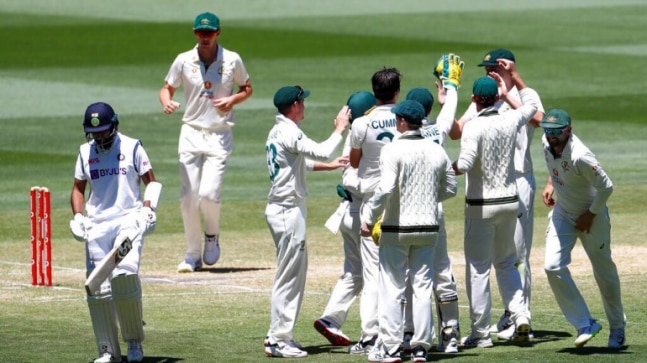 Former India captain and batting great Sunil Gavaksar has given a very straightforward piece of advice for Cheteshwar Pujara, who has failed to fire in the ongoing Test series against Australia. On Tuesday, Pujara got out for just 3 runs on a Pat Cummins delivery and stormed out of the field fuming.

During an exclusive interview with India Today, Sunil Gavaskar was asked to suggest Cheteshwar Pujara a way to bounce back ahead of the third Test. Gavaskar took no time in answering the question, quipping, “He should go and talk to the batting coach Vikram Rathour. That’s what I would tell him because that is why people have been appointed for.”

“Well, you have to check with him,” Gavaskar replied with a smile on his face.

Notably, the credibility of Vikram Rathour has been questioned time and again by fans and experts. After India got 36 all out in Adelaide. fans had lashed out at him on social media.

Cheteshwar Pujara, the highest run-scorer from India and Australia during the last Test series Down Under, has failed to fire this time. Australian bowlers seem to have worked out a plan for him and that has been working. Pujara has now often edged his delivery to the wicketkeeper and the fielders close to him.

“He has got some beauties. The one in Adelaide which he had to play, the one at Melbourne in the 1st innings, he got terrific deliveries. There is not much a batsman can do when a bowler bowls a delivery like that. In the 2nd innings it felt like he wanted to finish off the match so he played an uncharacteristic shot. That is not what you would see from Pujara, especially at the start of the innings,” Gavaskar further said.

Let Rohit and Mayank open in the third Test match

Further, the 71-year-old said that Mayank Agarwal should be given another chance and should not be dealt with harshly because of his recent failures. Gavaskar hailed the temperament of the right-hander, saying that he was all set to become the fastest Indian to score 1,000 runs at one point of time.

“Mayank Agarwal has shown a very good temperament in the last year-and-a-half. Look at the way he has batted against South Africa, these are difficult times and every batsman goes through a lean patch. I would not be harsh on him and I will give him another go. Let Rohit and Mayank open in the third Test match. This Is what I would think. This is up to Mayank now, to try and curtail the backlift and may be narrow that stance that he has and look to be better. At one stage it looked like he would be the fastest Indian to get Test 1000 runs but he hasn’t got because he is playing against fabulous new ball bowlers of Australia,” Sunil Gavaskar said.

The third Test between India and Australia will be played in Sydney Cricket Ground (SCG) from January 7.