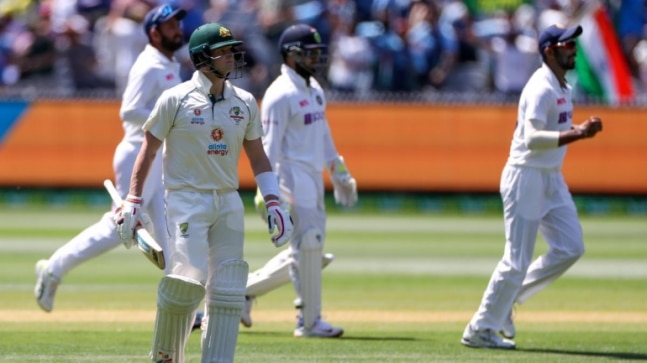 India spinner Ravichandran Ashwin has troubled the Australia star batsman Steve Smith a fair bit in the series so far.

Ashwin has managed to dismiss Smith twice in the four innings so far. What is even more interesting is that Smith has never looked like his confident self while batting against the bowler in the series so far.

Of the two dismissals to Ashwin, one was of the outside edge, while the other was of the inside edge, and according to cricket expert Deep Dasgupta it is the battle between the two players that has emerged to be the subplot of this series.

“‘Jinks’ calmness in the dressing room really provided us that stability to go out there and express ourselves in this game.”

– Ravi Ashwin chats with @alisonmitchell about India’s win and his plans against Steve Smith #AUSvIND pic.twitter.com/n1eIbLXQp8

After India’s win in the Boxing Day Test on Tuesday, Ashwin said that Steve Smith holds the Australian batting line-up together and therefore it is always important to dismiss him early.

“Look you are coming down to Australia and if you can’t get Steven Smith out, it is always going to be an uphill task. He pretty much holds the batting line-up together.

“Especially without David Warner not being around, Steven Smith’s responsibilities become even more. To be able to get him out early in the innings is something that we have worked on. We put together plans and when the plan works it is always a pleasure,” Ashwin told 7 Sports.

When asked about India’s comeback in the Boxing Day Test, particularly after the loss in Adelaide, Ashwin said that the bonding in the team is great and Rahane’s calmness rubbed off on the other players.

“Look I think getting bowled out for 36 was never going to be easy and in a country like ours, we are quite a proud cricketing nation. Losing Virat (Kohli) as well was a setback for the team.

“But we stuck on really well. Jinks (Ajinkya Rahane), Puji (Cheteshwar Pujara), myself and Jassi (Jasprit Bumrah) all of us have got a great bonding inside the team,and obviously Jinks’ calmness inside the dressing room provides us with the stability to go out there and express ourselves in the game, and I thought a good first day set us on a roll,” Ashwin added.