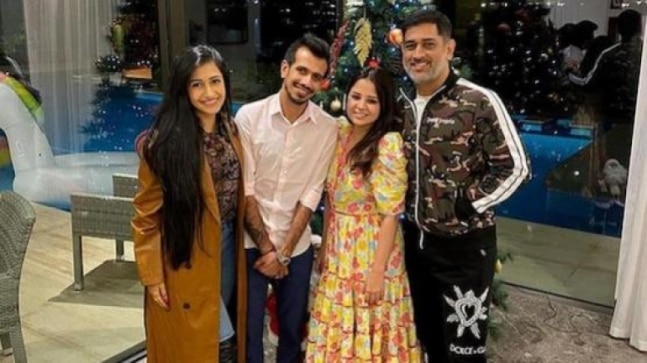 Yuzvendra Chahal and Dhanashree Verma got married on December 22 and since then have been active on social media, serenading their followers with pictures and videos of their honeymoon in Dubai.

India spinner Yuzvendra Chahal, who is on his honeymoon with wife Dhanashree Verma in Dubai, were invited for dinner by the former Indian captain Mahendra Singh Dhoni.

Chahal took to his Instagram to share pictures from the dinner and captioned it, “Extremely happy & blessed.”

His wife Dhanashree Verma also took to social media to share more photos of the evening and thanked Dhoni and and his wife Sakshi for the dinner.

“Extremely blessed. That’s all I can say Thank you @mahi7781 @sakshisingh_r for a lovely dinner Felt like home,” read Dhanashree’s post.

Yuzvendra Chahal and Dhanashree Verma got married on December 22 and since then have been active on social media, serenading their followers with pictures and videos.

Chahal, who was recently involved in the white-ball series against Australia, seems to be enjoying his time off from the game. It has been a long schedule for the bowler as he was involved in Indian Premier League in Dubai prior to the Australia series.

Chahal had a successful season with the Royal Challengers Bangalore in IPL 2020 as he claimed 21 wickets in 15 matches. He took the most wickets by his side and was the fifth highest wicket-taker in the tournament.

Because of his good run in IPL 2020, he was included in India’s tour of Australia for the T20I and ODI series and therefore travelled directly from the bio-secure bubble in UAE to another one in Sydney.

It was after the tour of Australia that he returned to India earlier this month and soon after tied the knot with Dhanashree Verma.