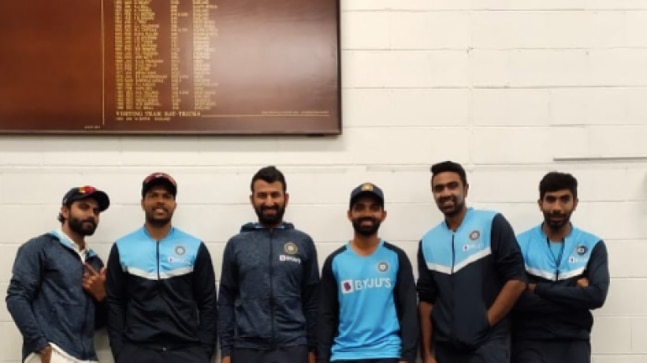 India vs Australia: Ravichandran Ashwin and Rohit Sharma were involved in a hilarious banter over Cheteshwar Pujara being ‘too stiff’ in a picture posted by the off-spinner on Tuesday.

Veteran off-spinner Ravichandran Ashwin, with figures of 3/35 and 2/71, was one of India’s top performers in the recently concluded Boxing Day Test, which the visitors won by 8 wickets on Day 4. Hosts Australia and India are now level on 1-1 in the 4-match Test series down under.

In the picture, everyone’s smiling and relaxed but despite the smile on Cheteshwar Pujara’s face, he was standing in an ‘attention’ pose unlike his other teammates. Rohit Sharma, who is currently in quarantine in Syndey and is supposed to join the Indian team ahead of the 3rd Test, wrote a cheeky comment on Pujara. ‘Pujara too stiff’: wrote Rohit Sharma on the picture posted by Ravichandran Ashwin.

The light-hearted banter among the cricketers showcases the positive mindset in the Indian camp after India’s thumping 8-wicket victory in Melbourne on Tuesday. Australia and India are set to play the 3rd Test in Syndey, starting on January 7.