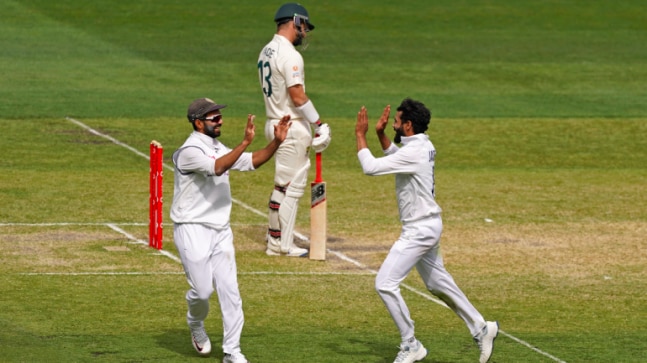 Ajinkya Rahane expertly led India to victory in the Boxing Day Test against Australia in Melbourne on Tuesday. The four-match series now stands level at 1-1.

Team India head coach Ravi Shastri heaped praise on stand-in skipper Ajinkya Rahane after he led the side to a memorable 8-wicket victory over Australia on Day 4 of the Boxing Day Test in Melbourne on Tuesday.

Resuming on their overnight score of 133 for 6, the Aussies managed to add 67 runs in the extended first session before getting bowled out for 200. India needed just 70 runs to win the match, which they did in 16 overs with Shubman Gill and Ajinkya Rahane remaining unbeaten on 35 and 27 respectively.

With this result, Rahane became the 2nd Indian captain after MS Dhoni to win his first 3 games as the visitors levelled the four-match series 1-1 and avenged their humiliating defeat in the first Test in Adelaide last week.

The match belonged to Rahane, who took over the captaincy after the wreckage in Adelaide, with regular skipper Virat Kohli returning to India for the birth of his first child.

“Ajinkya Rahane is a shrewd leader, has a good understanding of the game. He was a calming influence for the debutants and the bowlers.

“Both Kohli and Rahane are good readers of the game. Kohli is passionate and in your face. Ajinkya is prepared to sit back in a calm and composed manner. Deep inside, he knows what he wants,” Shastri said after the match.

Rahane’s 112 in India’s first innings was the biggest difference between the two sides as none of Australian batsmen could score more than 48 runs individually in this match. Shastri also pointed out the same and termed Rahane’s knock as the turning point of the 2nd Test.

“Ajinkya Rahane’s innings was the turning point. The discipline on such a big stage. Captain of the team, bat at No. 4, on probably the toughest day to bat as it was overcast. He batted for 6 hours… unbelievable concentration,” Shastri said.

Kohli also was delighted with the victory and hailed the performance of stand-in skipper ‘Jinks’.

“What a win this is, absolutely amazing effort by the whole team. Couldn’t be happier for the boys and specially Jinks who led the team to victory amazingly. Onwards and upwards from here,” he tweeted.