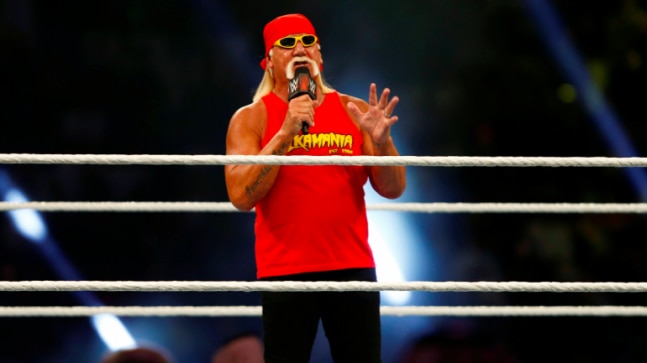 At Raw ‘Legends Night’ this Monday, January 4, you’ll be entering the WWE ThunderDome for the first time. What do you think of the ThunderDome and are you excited to witness it in person?

HH: Oh man I’m really excited. I love the way the way the ThunderDome looks, with all the screens and the fan interaction. I think it is a step above what I expected, you know, with all the craziness in the world today. I mean, I’ve had very exciting moments. I remember going into WrestleMania 1 with goosebumps not knowing what the heck was going on. I remember being scared to death of Andre the Giant and being afraid of my own shadow not knowing if he was going to break me in half. Then I remember wrestling the Rock and the fans were cheering. It’s kind of one of the crazy WrestleMania moments. For me to show up at the ThunderDome after all this time? To have Flair and Kurt Angle with me, all my buddies, the Big Show? We’ve even got Beth Phoenix and Tori Wilson. It’s just the unexpected wrestling moment I didn’t think was going to happen this late in my career. I am just totally pumped for this. I feel like I’m getting ready for WrestleMania or something.

This year marked 18 years since your iconic clash against The Rock at WrestleMania 18. He recently spoke of what you said to him backstage after the match and the generosity of “passing the torch” to him. How important do you think it is for Legends to “pass the torch” on to the next generation?

HH: I think it’s the most important thing in this business, to maintain the artform, and to make sure that the next generation, the next decade of wrestlers, is ready. There was a time I was red hot in the 80s and all of a sudden the 90s came and it was time to pass the torch but, it didn’t happen that way. I mean they didn’t have enough guys ready to lead at that time so, you know, we skipped a generation. It took time to pass that torch, which should have been passed at the end of the 80s. I mean we tried with a couple of guys, putting the belts on them and stuff, but they weren’t ready to run. They weren’t ready like John Cena, they weren’t ready like The Rock, they weren’t ready like Stone Cold. So it’s very, very important that the torch is passed in the correct way and the guys that have all this experience don’t just walk away. They stay there long enough to build the storylines, build the talent, and then pass the torch in the correct way. It’s very, very important.

A few years ago you identified Kevin Owens as the ‘next big thing’ after his NXT Championship win. Is there anyone else that you have identified as a major future star?

HH: Kevin Owens was an exception to the rule, you know, I was really into the NXT thing and I didn’t see any one guy there that really grinded and just thumped and thumped and stayed on it and was just vicious, and knew when to back off and when to beg and knew all the Pat Patterson tricks. Then I saw Kevin Owens and I thought “Wow, that’s the guy. That’s the guy. You know, he can be the next one if he’s given the opportunity.” Right now there’s another guy that’s stumbling into that situation. You know, acting like he doesn’t know what’s going on but he’s smart as hell. That’s the “Bro”, Riddle, who kicks his flip-flops off when he comes into the ring. I’ve been watching him and he’s really got good instincts. He’s really got a good aptitude for understanding what needs to be done, you know. It’s all about instincts and timing. His timing is off a little bit but it’s starting to come each and every week so, I mean, he would be the next one I’d put my money on.

You are huge on social media, particularly Instagram. How do you think your early WWE career might have been different if social media had existed?

HH: Oh my gosh, I got a feeling we would have been selling tons and tons more merchandise I’m sure! Back in the day there were no cell phones, there was no internet, we didn’t even have camera phones to take the picture. I know how my merchandise sold at the live venues and I know how the VHS tapes sold ‘The Best of Wrestling’, ‘Hulkamania’, ‘Hulkster’ so if we would have had social media I think the numbers would have just blown through the roof as far as licensing and merchandising. And, of course, the awareness. We would really have had a better handle on how big our fanbase was and how to service the international audience.

Triple H has high praise for WWE Champion Drew McIntyre and Universal Champion Roman Reigns, comparing their clashes as on the level of a Hogan vs Flair match. What do you think of the current Champions?

HH: I’m a little biased to both of those guys. Romans Reigns’ father Sika and his partner Afa, they pretty much put me on track when I was lost. I mean, my first run in WWE I left Florida and we met up and drove to the first TV and when we were up there they had been in the business quite a while so they groomed me and they helped me and kept me from making too many mistakes when you’re first in the business. I’ve got so much respect for the Samoan dynasty, and to understand how it peaked with The Rock, I see Roman Reigns taking it to a whole other level now. He’s solid, he’s consistent, he’s got the look and there are no holes in his work he’s really, really spot on. Then on the other hand I’ve watched Drew McIntyre, and the years of training and in-ring experience, now he’s as legit as they come. He’s got the eye of the tiger look in his eyes. He’s got the body of a god. His work is solid, everything he does is spot on. His interviews are good. So I think Triple H was right when he’s comparing those two guys having classic matches like the stuff Flair and I had I think he’s spot on but I think they can take it to a whole other level.

HH: Well, you know, I will gracefully accept and acknowledge that compliment because it means so much, especially coming from my peers, to say that. The guy who is my hero, and who I think is the greatest wrestler of all time, that’s Ric Flair. So I do appreciate the comment but I have a different opinion about who is the best wrestler and the greatest of all time, I have to go with Flair. It’s in his blood he laid the groundwork. He raised the bar that no one has really been able to follow as far as work ethic.

Earlier this month we sadly lost Pat Patterson. You shared an emotional tribute to him with a photo of your first on-screen interview. Just how big is the legacy that Pat has left to the world of professional wrestling?

HH: Pat helped so many of us. I mean, he’s got a huge legacy he evoked all kinds of emotion. When I wanted to get into the wrestling business, these guys were wrestling seven nights a week on the road and the last thing they wanted to do was mess around with some kid Pat Patterson took time out of his schedule to come down and teach me how to take bumps, how to go out through the ropes and do all kind of stuff, and then as the years went by we became really close friends When he passed away it was really a tough day. It was a very tough day.

What should fans expect from Raw Legends Night?

HH: Well, the fans should tune-in because you never know what to expect. I don’t even know what to expect. I’m going there just to have a great time, reminisce with friends, but when you’re talking about having Flair and Kurt Angle there, Big Show, Carlito anything is possible. We could end up in the ring, brother. We could end up taking over the whole WWE in one given night. You don’t know what’s going to happen. That’s why I’m so excited.

Royal Rumble is coming up on January 31: what makes that match so special, and what is the secret to winning a Royal Rumble match?

HH: You’ve got to realize the odds are against you. When you go out there with 30 other guys the odds are definitely against you. You have to have a whole lot of luck, but more than anything it’s pacing. I don’t care if you get Number 1, or you get Number 15, or you get Number 29, it’s pacing because once you get out there you just never know how long you’re going to be pounding and grounding. It’s a real lucky situation and an enduring situation, it’s like having an Iron Man right in the ring. You just never know who is gonna come at you, who is gonna cheap shot you, who acts like they might help you but is just there to set you up and stab you in the back. You have to pace yourself. You have to have eyes on the back of your head. Otherwise, you don’t survive the Royal Rumble.