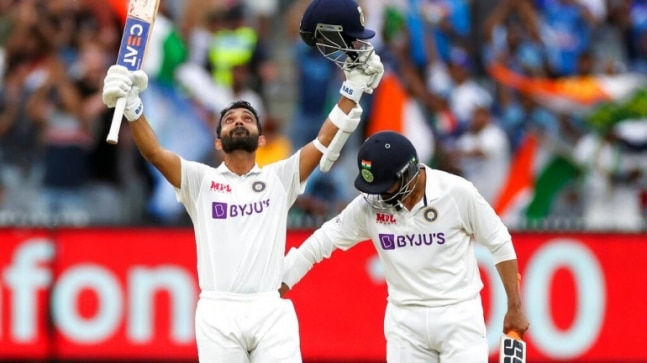 Former Pakistan fast bowler Shoaib Akhtar said he genuinely believes that India are capable of winning the ongoing Test series against Australia in Australia. The legendary pacer said Ajinkya Rahane and his men showcased tremendous ‘courage and character’ to bounce back from the defeat in Adelaide to level the series with a memorable victory in the Boxing Day Test in Melbourne.

Shoaib Akhtar heaped praise on stand-in captain Ajinkya Rahane and the team management, saying it takes a lot of character to bounce back from a defeat like the one India suffered in Adelaide.

India were bundled out for their lowest-ever Test score of 36 in the 2nd innings in Adelaide after dominating the first 2 days of the series opener. The visitors, under Virat Kohli, weren’t able to recover from the blow as Australia gunned down a 90-run target with ease to go 1-0 up.

Shoaib Akhtar, speaking to Boria Majumdar on Sports Today, said he wasn’t able to believe his own eyes when he saw the scorecard showing 36 for 9. However, the former Pakistan pacer said he expects India to use the winning momentum and put pressure on Australia in the remainder of the series.

India were without Virat Kohli, Mohammed Shami, Ishant Sharma and Rohit Sharma for the 2nd Test. They lost Umesh Yadav to an injury in the 2nd innings but that didn’t stop Ajinkya Rahane and his men from putting their best foot forward and winning the second Test by 8 wickets.

Couldn’t believe my eyes when I saw 36 for 9: Akhtar

“I was telling a few friends in Delhi that India are going to beat the hell out of Australia. I told them that if the batting performs, if the middle order performs, then India have a fair amount of chance to win this series. They said I was hyping up a bit too much,” Shoaib Akhtar said.

“But you know, characters are exhibited in crisis. The exhibition of character from the Indian team is tremendous. I think this guy is so quiet and so calm. Ajinkya Rahane doesn’t shout or do nasty things on the field, he just stays quiet and does his thing which is cool captaincy. Under his leadership, the guys suddenly performed.

“Whatever you say about Ravi Shastri, Ajinkya Rahane and the team, India’s strength is not people who are playing on the field, it’s the bench strength. They seized the opportunity and went out there and performed.

“Getting hammered in one Test and then coming back and winning the next Test comprehensively shows the character of the team and the management. And at the same time, people are out there to win the Test match.

“Characters like Bumrah, Rahane, Gill Jadeja is playing a crucial role. You somehow put him in any situation and he is going to go out there and perform for you. Look at this, this character has to be shown to the world.

“Who would have thought 10-15 years ago that Australia would get hammered by India or Pakistan or some other subcontinent team? Now it’s happening. Now, I want to see this series full of clashes. I want India to win the series because they have made a great comeback. And they have shown a lot of character and great courage. Ajinkya Rahane hundred is just the turnaround,” Akhtar said.

Ajinkya Rahane led from the front and hit a match-winning hundred. Rahane was tactically brilliant as well as he marshalled his bowling attack to perfection and made some unorthodox field settings to put pressure on Australia.
India will be hoping to take an unbeatable series lead and retain the Border-Gavaskar Trophy when they take on Australia in the 3rd Test in Sydney from January 7.

Watch the full exclusive interview with Shoaib Akhtar on January 1 on Sports Today.