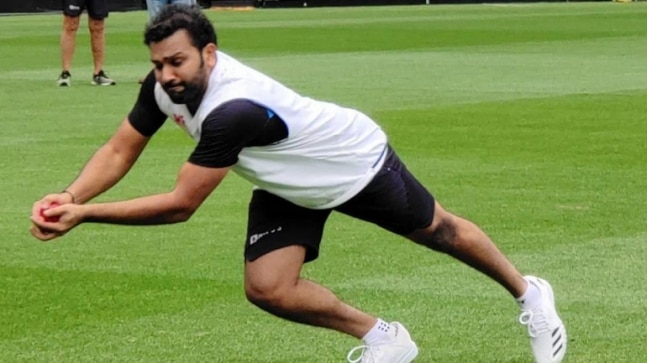 Rohit Sharma began his first practice session at the nets in Australia on December 31 along with batting coach Vikram Rathour ahead of the Sydney Test.

Rohit Sharma trains ahead of Sydney Test vs Australia. (Courtesy by BCCI)

India opener Rohit Sharma began his training on December 31 under the supervision of batting coach Vikram Rathour as the rest squad enjoyed their 2-day rest ahead of the Sydney Test. Rohit had joined the rest of his teammates at a Melbourne hotel after landing in the Australian city post the completion of the 14-day mandatory quarantine period in Sydney.

“It’s only Rohit Sharma, three throw down guys, and the batting coach. The rest of the boys are on holiday for 2 days but Rohit Sharma out there training,” Boria Mazumdar said on Sports Today.

As the team enjoys a well deserved 2 day break @ImRo45 will be at the nets for his first practice session in Australia today. He will have his first hit under the eyes of the batting coach and with the throwdown specialists. For him the SCG countdown begins.

The destructive opener missed the limited-overs leg of India’s tour Down Under as well as the first two Tests but is available for selection for the third Test in Sydney. Rohit passed a fitness test and reached Sydney earlier this month but he was not able to join the squad ahead of the Melbourne Test due to hard quarantine rules.

Head coach Ravi Shastri said India will take a call on Rohit Sharma after assessing his form and fitness in the lead up to the 3rd Test. The third Test is set to begin on January 7 at the Sydney Cricket Ground.