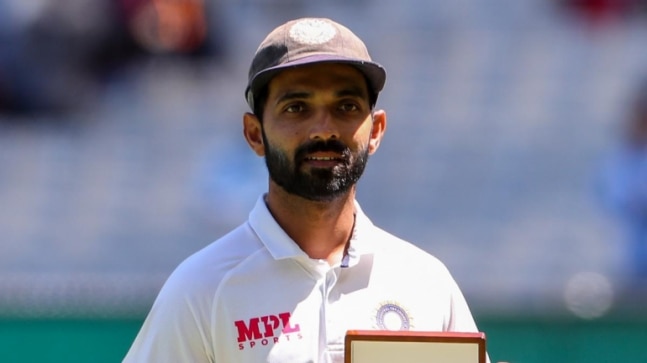 Sachin Tendulkar was all praise for Ajinkya Rahane’s batting and captaincy. (AP Photo)

Batting great Sachin Tendulkar heaped rich praise on Ajinkya Rahane’s batting and captaincy as India turned the tables on Australia to win the Boxing Day Test after Adelaide’s heartbreak but cautioned against comparing him with regular skipper Virat Kohli.

Ajinkya Rahane led India to “one of the greatest comebacks wins” as the visitors crushed Australia by 8 wickets in the Boxing Day Test on Tuesday. India put behind the horrors of 36-all out in Adelaide to successfully bounce back and level the series 1-1.

“I felt this was a brilliant performance by our team, the manner in which our team was able to play and the way Ajinkya led the team. Also if you look at senior cricketers and their contribution, it has been good,” Sachin Tendulkar told PTI in an interview.

“I thought Ajinkya batted brilliantly. He was calm, relaxed and composed. He had aggressive intent but aggression was rightly balanced by calmness and surety. So he did not miss opportunities when a boundary ball was there. And when one had to be patient, he was patient. The intent was very good.”

“People shouldn’t get into comparisons with Virat. Ajinkya has a different personality. His intent was aggressive. I would like to remind everyone that they are both Indians and they both play for India, so no individuals come above India. Team and country is above everything else,” he said.

Sachin, who has played against some of the finest Australian teams in his time, feels that Australia’s current batting line-up is ‘less settled’ with some ‘playing for their spots’.

“When I look at this Australian batting line-up and look at some of the earlier line-ups, I feel earlier line-ups were settled ones. Those players batted with a different kind of intent but this team doesn’t look very settled,” Tendulkar said.

“In this current Australian team, there are players who are not in good form and are unsure about their spots. In earlier teams, those batsmen batted in their slots as there was a lot of surety in their batting line-up,” Tendulkar said.