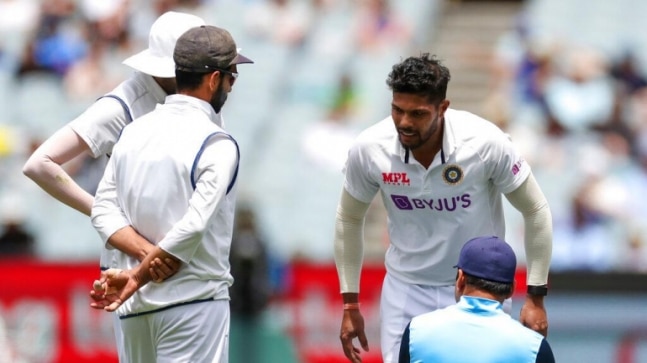 India pacer Umesh Yadav has been ruled out of the Test series vs Australia and will return home after sustaining a calf injury at MCG.

India pacer Umesh Yadav has been ruled of the Test series vs Australia due to a calf injury which he suffered while bowling his fourth over during Australia’s second innings on Day 3 of the Boxing Day Test.

Yadav was limping his way off the field after he hurt his calf muscle while bowling in the 8th over of Australia’s innings. Umesh Yadav played both the Test matches on the tour and picked four wickets while bowling 39.4 overs.

The 33-year-old pacer, who was wicketless in the 1st innings, claimed the wicket of Australian opener Joe Burns on Day 3 before leaving the field, after delivering just 13 balls in the morning. Yadav, 33, was taken to the hospital for scans after his spell was cut short due to pain in his calf.

In what is a downer for India @y_umesh will now be returning to India and is out of the series. Wish him a quick recovery and hope to see him back for the England series. Watch @SportsTodayofc @IndiaToday for more details.

“Umesh Yadav complained of pain in his calf while bowling his 4th over and was assessed by the BCCI medical team. He is being taken for scans now,” BCCI media team said in a statement.

Umesh was in a lot of pain and called for attention immediately. Umesh went off the field and Mohammed Siraj completed the 8th over. India are already without the services of star pacers Ishant Sharma and Mohammed Shami in the Border Gavaskar series.

“Umesh is unlikely to take the field any further in this match and also looks doubtful for the next Test,” a BCCI source said.