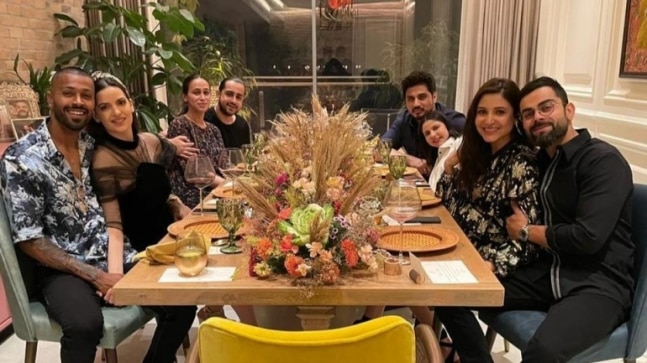 Star India cricketer Virat Kohli and Hardik Pandya met over a get together with their partners to celebrate the arrival of New Year 2021.

2021 has arrived and Indian cricket team captain Virat Kohli has taken the social media by storm all over again. The father-to-be has shared an adorable picture with his wife and actor Anushka Sharma on the occasion, joining them in the frame are non other than Hardik Pandya and Natasa Stankovic, who became a first time parents themselves in July, 2020.

In the first picture, the two star couples can be seen posing with a bunch of other friends, while in the second, Kohli is standing alongside Anushka, who looks ravishing in her one piece,

“Friends who test negative together spend positive time together! Nothing like a get together with friends in a safe environment. May this year bring a lot of hope, joy, happiness and good health. Stay safe!” Virat Kohli has captioned the pictures.

Friends who test negative together spend positive time together! Nothing like a get together at home with friends in a safe environment. May this year bring a lot of hope, joy, happiness and good health. Stay safe! #HappyNewYear2021 pic.twitter.com/EyFcUBLqMi

Virat Kohli is on a paternity leave and has returned from Australia after the completion of first Test.

“As committed as you are to play for your country this is a very, very special moment in life that you want to be there for at any cost. It’s a blessed time and we’re very excited,” Kohli had said during an informal chat with Steve Smith on the eve of the Border-Gavaskar Test series opener.

On the other hand, Hardik Pandya starred for Mumbai Indians in the IPL and then for India in the white-ball series’ against Australia before returning. There were spculations that Hardik Pandya could feature in the Test series as well but the 27-year-old had shunned it by making his intentions clear.

“I will leave that to some other time. I really like to see the family back home. So the plans have been made,” Pandya had told the presenter when asked on Fox Sports if he will consider staying back for the Test series.

India have won the 2nd Test in Virat Kohli’s absence and are now gearing up for the third Test in Sydney from January 7.