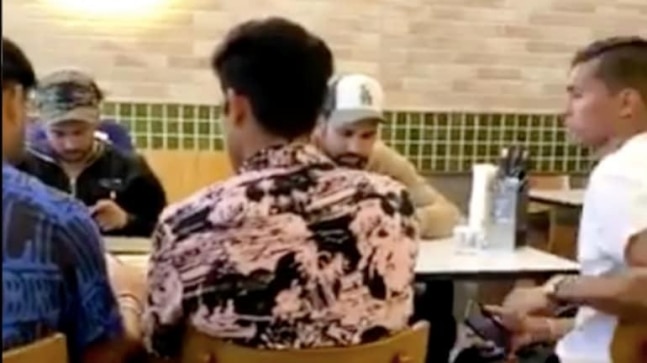 The five players – Rohit Sharma, Rishabh Pant, Shubman Gill, Prithvi Shaw and Navdeep Saini – had visited a restaurant in Melbourne on New Year’s Day and were seated indoors, while the protocol permits players to sit in only outdoor areas in restaurants.

Snap shot of Indian cricketers at an Australian restaurant from a video posted by a fan. (Courtesy: Twitter)

The five Indian players who had visited a restaurant in Melbourne on New Year’s Day have been placed under isolation after a video of theirs appeared on social media where they were seated in an indoor area in the diner.

According to a statement released by the BCCI on Saturday, the players – Rohit Sharma, Rishabh Pant, Shubman Gill, Prithvi Shaw and Navdeep Saini – have been separated from the Indian and Australian squads but will still train “in accordance with the strict protocols that have been put in place to ensure the ongoing safety of all members of the Indian and Australian squads.

“The BCCI and CA are investigating the matter and seeking to determine whether the outing constitutes a breach of biosecurity protocols.

“In the interim, on the advice of the Australian and Indian medical teams, the aforementioned players have been placed in isolation as a precaution. This will include separating the group of players from the broader Indian and Australian squads when traveling and at the training venue.

“Players will be permitted to train in accordance with the strict protocols that have been put in place to ensure the ongoing safety of all members of the Indian and Australian squads,” the BCCI release said.

This incident came into the limelight after an Indian cricket fan in Melbourne, Navaldeep Singh, who happened to be at the same restaurant had shared about it on social media.

Singh, posted a video on social media of the cricketers sitting on a table behind him at the restaurant and claimed that he had cleared their $118.69 bill.

He had also written of a brief interaction with the players when they found out that their bill had been paid, and claimed at the time that Rishabh Pant had “hugged” him.

But later in the day, the Indian fan posted a clarification on Twitter, and rubbished such reports.

“Clarification – Pant never hugged me it was all said in excitement we maintained social distance all thru:) Apologies for miscommunication @BCCI @CricketAus @dailytelegraph,” the Indian fan posted on Twitter.

Cricket Australia’s strict bio-security guidelines permit the players to eat out at restaurants, but they must be seated in an outdoor area.