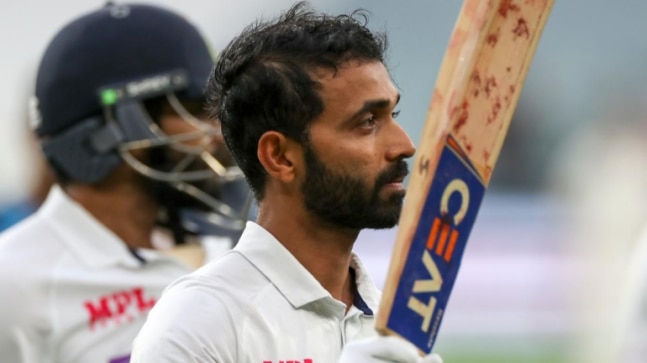 India stand-in-skipper Ajinkya Rahane has had a lot of attention on him ever since the departure of Virat Kohli after the Adelaide Test, and he led the team valiantly in Melbourne to win the game by 8 wickets and level the series 1-1 after the disappointing loss in the first Test.

Ever since he hit his 12th hundred in the Boxing Day Test and led India from the front, Rahane has earned a lot of praise from several former cricketers such as Sunil Gavaskar, Sanjay Manjrekar and Ian Chappel.

But a lot of hard work and preparation has gone in behind the good start to his Australia tour, if one is to go by the words of Rahane’s mentor and coach Pravin Amre.

Amre described how Rahane knew exactly what he wanted to work on in his game before the Australia tour and also said that he was ready to take blows on his body as he thought it will be required to survive some sessions during the tour.

“Ajinkya was on his own (during practise sessions). He knew what he was doing and he was asking my throw-down person to bowl him in this and that area, he wanted to practise for this type of a ball, he said.

“He made sure that he will have less reaction time when he was going to prepare in those practise sessions. He was ready to take the blows on the body because he was aware that there will be sessions in Australia where he has to take blows on his body to survive that session.

“I think that’s what he did before going and I was really glad to see how he was preparing, because Ajinkya’s story is that he was successful only because he prepared really well before each and every tour,” said Pravin Amre on Sports Today.

Rahane’s journey has not been an easy one, says Amre

Amre went on to say that behind the success of Rahane, there is years of practise and that although people may now be talking about how successful he has been, the journey has never been easy for him.

“I am a student of my guru Acharekar sir (Ramakant Achrekar). I remember his words that for 15 minutes of success in cricket, you need 15 years of hard work, and I think that’s what Ajinkya is doing for many years. People are thinking that he is successful right now, but behind it he has worked hard for so many years. It has not been an easy journey for him. He was the 12th man for more than 15-17 Tests before getting his India cap,” Amre added.