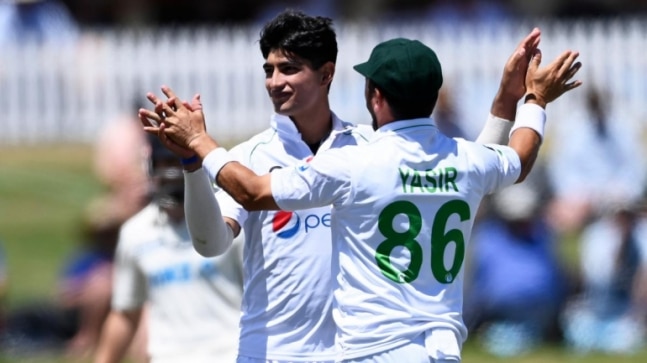 Pakistan tail-enders Mohammad Abbas and Naseem Shah were at the crease with the Pakistan score at 293/9 when the hilarious conversation between the two took place.

A conversation between Pakistan tail-enders Mohammad Abbas and Naseem Shah that was caught on the stump mic during the second Test match against New Zealand has gone viral on social media.

The two players were at the crease with Pakistan stuttering at 293/9 in 82 overs. It was during a break between the overs where the young talent Naseem Shah told his senior player, “Abbas bhai aapko pata hai sari zimmedaari mere upar hai, single karna hai varna daant pad jaayegi” (Abbas bhai, the onus of the batting now is upon me. You have to take a single, otherwise you will be scolded).” Abbas has a hearty laugh on hearing this.

Pakistan were eventually all-out for 297 in their first innings and with it, the stumps were called for the day. Batsman Azhar Ali led the way with his 93-run knock while the skipper Mohammad Rizwan also notched up another half-century on the first day of the Christchurch Test at the Hagley Oval.

Pakistan at were point were 83/4, but a 88-run partnership between stand-in-skipper Mohammad Rizwan and Azhar Ali, and some resistance from the tail-enders helped them get to 297. Rizwan was eventually dismissed for 61 runs.

New Zealand were led once again led by Kyle Jamieson, who took a 5-wicket haul and was ably supported by veteran Tim Southee and Trent Boult. Matt Henry, who came into this match in place of the injured Neil Wagner took one wicket.