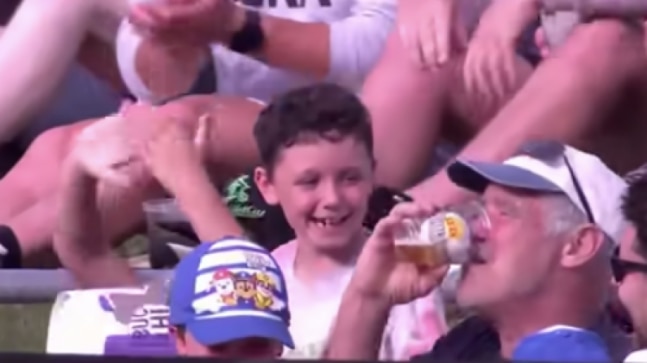 During the match 23 of Big Bash League (BBL) 2020-21 season between Hobart Hurricanes and Melbourne Stars, a Dawid Milan six landed into the beer cup of an elderly fan sitting sitting in the stands.

Cricket fans in Australia are back in stadium and they are making up for the lost time due to the coronavirus pandemic. Apart from witnessing the blockbuster India versus Australia series live from the ground, fans are also busy cheering for their favourite teams in the Big Bash Bash League (BBL) 2020-21 matches.

The shortest and the fastest format of the game is providing entertainment of highest level to the fans, while fans in return are making sure that they contribute to the whole package.

In one such incident on Saturday, a six from Hobart Hurricanes star and world’s number one T20I batsman Dawid Malan. landed in the beer cup of an elderly fan. TV replays later showed that another fan had attempted to grab the catch but instead deflected it into the beer cup of the person sitting next to him.

Melbourne Stars’ Sam Rainbird, who was fielding in the fine leg region, went to fetch the ball but the fan refused to give it back and continued enjoying his beer with the ball still inside the cup.

“What about the Covid? He doesn’t want to touch it. You can’t give him back without the beer,” the commentators said, while finding it hard to control their laughter.

The ball, however, was replaced after the fan threw it back in the playing area.

Dawid Malan scored 75 off 56 to help Hurricanes post 164 for 5 in 20 overs. Melborune Stars captain Glenn Maxwell scored a valiant 70 off 37 but his side fell short of the target by 27 runs in the end.