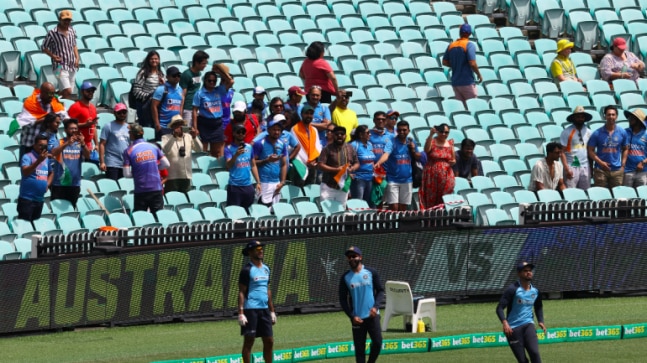 Cricket Australia has decided to reduce the Sydney Cricket Ground’s capacity to 25 per cent initially for the upcoming third Test between Australia and India which will start from January 7.

A spike in cases of coronavirus in Sydney has compelled the Australian cricket board to bring down the capacity at SCG from 50 to 25 per cent, around 10,000 spectators, after taking recommendation from the New South Wales (NSW) government.

CA was in fact considering shifting the third Test from Sydney to Melbourne however eventually decided to stick with the SCG.

“In response to the public health situation in NSW, we’re working closely with Venues NSW and NSW Health to put appropriate biosecurity measures in place for our staff, players, match officials, broadcasters and fans to make sure we play the third Test at the SCG safely.

“Reducing the capacity of the venue is crucial in achieving social distancing requirements, and we sincerely thank ticketholders for their patience, as we process refunds today, reconfigure the SCG seating plan to deliver these social distancing measures and go back on sale,” CA interim Chief Executive Officer Nick Hockley mentioned.

All purchased ticket holders will receive a full refund, including all associated costs such as ticket insurance.

“Tickets will be available on sale exclusively to those who have already bought a seat at 5pm AEDT on January 4, with remaining tickets released at midday AEDT on January 5.

“To date, we’ve been able to deliver a safe and successful summer of cricket due to our detailed bio-security protocols, the cooperation and support of public health officials and the hard work of so many individuals behind the scenes, ” Hockley added.

The SCG hosted 2 ODIs and the first of two T20Is between Australia and India in November-December last year, at which crowds of around 18,000 were permitted.

Both teams were scheduled to reach Sydney on December 31 for the New Year’s Test however they stayed back in Melbourne for a couple of extra days at the same time as Sydney battled a number of outbreaks and authorities urged tens of thousands of individuals to get tested.

The players and support staff from India and Australia will reach Sydney on Monday (Jan. 4). The 4-match series at present stands level at 1-1 after India bounced back from the Adelaide defeat to beat Australia by eight wickets within the Boxing Day Test earlier this week.