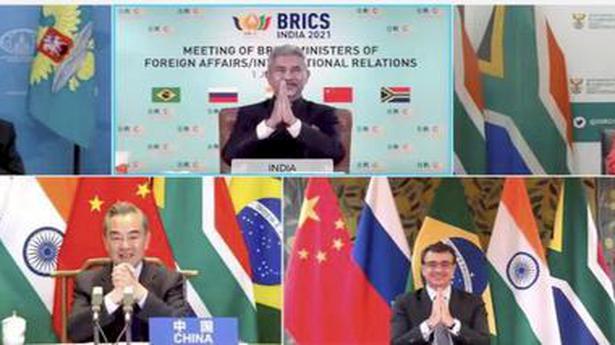 The Foreign Ministers of the BRICS (Brazil, Russia, India, China and South Africa) grouping on Tuesday expressed “grave concern” with regard to the global COVID-19 pandemic.

Addressing a virtual meeting, Chinese Foreign Minister Wang Yi expressed solidarity with India over the recent surge in COVID-19 cases, and said the grouping was ready to assist the country to fight the pandemic “as long as needed”.

The Ministers also agreed on reforming the multilateral system, which was the “first time” that such a consensus was reached, sources said.

“The Ministers expressed grave concern over the continuing public health, societal and economic impact of the COVID-19 pandemic globally. They expressed condolences for lives lost and pledged solidarity with the affected families,” a statement issued after the meeting said.

The gathering described the pandemic as one of the most serious challenges before the world, while also highlighting the importance of “respect for territorial integrity” and the “sovereign equality” of states.

In his comments, Mr. Wang said, “At this trying time, China stands in solidarity with India and all the BRICS countries. As long as it is needed by India, I believe that all BRICS partners, including China, will provide further support and assistance at any time. We are fully confident that India will certainly overcome the pandemic.”

Welcoming the participants, External Affairs Minister S. Jaishankar recollected the journey that the BRICS Foreign Ministers had undertaken since their first meeting in New York in 2006. India is the Chair of BRICS for 2021, when the organisation completes its 15th year of existence.

A joint statement issued after the meeting called for “equitable” access to vaccines, medicines and technologies as well as equipment to deal with the pandemic. “The Ministers reaffirmed the need to use all relevant measures during the pandemic, including supporting ongoing consideration in the WTO [World Trade Organization] on a COVID-19 vaccine intellectual property rights waiver and the use of flexibilities of the TRIPS [Trade-Related Aspects of Intellectual Property Rights] agreement and the Doha Declaration on the TRIPS agreement and public health,” the statement said.

India and South Africa have been demanding the TRIPS waiver for the COVID-19 vaccines. The mention of the term “flexibilities” in the joint statement is being viewed as a normative step forward towards greater vaccine equality and availability in the world.

Apart from the support at the WTO, the Foreign Ministers also expressed support for the “comprehensive strengthening and reforming” of the UN Security Council, the General Assembly, the UN Secretariat and the Economic and Social Council.

In a detailed section, they said the workings of the international multilateral arrangements should be more “responsive” and “inclusive”.

“It should strengthen capacities of individual States and international organizations to better respond to new and emerging, traditional and non-traditional challenges, including those emanating from terrorism, money laundering, cyber-realm, infodemics and fake news,” the joint statement said.

The statement also reflected the grouping’s determination to deal with global terrorism and expressed commitment to fully implement the BRICS Counter Terrorism Strategy., including a “result-oriented action plan”. It also supported a sustainable solution to the Afghan crisis.