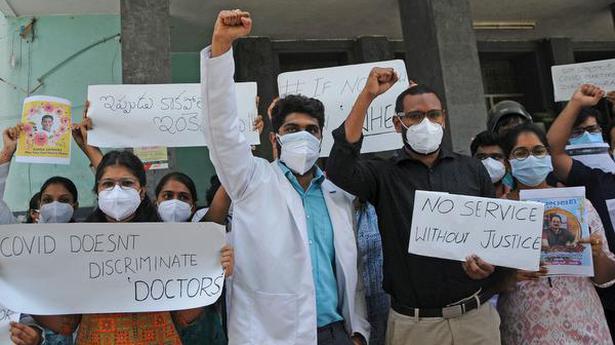 So far, Delhi, Bihar, U.P. and Rajasthan have lost the maximum number of doctors.

The Indian Medical Association (IMA) said that 594 doctors died during the second wave of COVID-19 across the country. It released an updated list on Wednesday and noted that Delhi (107), Bihar (96), Uttar Pradesh (67) and Rajasthan (43) have lost the maximum number of doctors so far.

While no such count is available for other medical staff currently, the Centre earlier this week announced a new system of processing the insurance claims under the ‘Pradhan Mantri Garib Kalyan Package (PMGKP) — Insurance Scheme for Health Workers Fighting COVID-19’.

The Health Ministry noted that claims would be certified by the District Collector and will be settled in 48 hours after approval.

The move follows several States raising the matter of processing delays in insurance claims. “This latest order is aimed at cutting down delays and to further streamline and simplify the processing of the insurance claims,” said the Ministry.