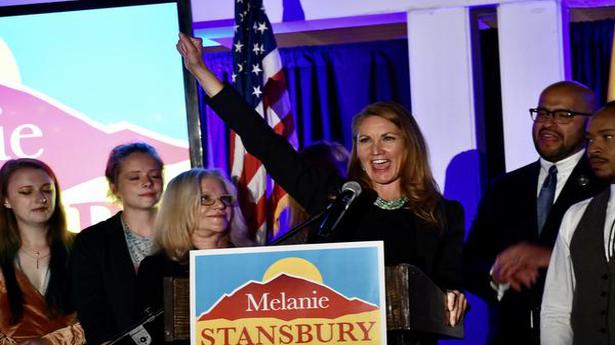 Her victory shores up the Democratic majority in Congress ahead of 2022 midterm elections.

Ms. Stanbury prevailed on Tuesday in a four-way race after campaigning in support of major initiatives of the Biden administration.

Ms. Stansbury closely aligned her message to voters with proposed and enacted Democratic legislation on pandemic relief, infrastructure spending and interventions to slow climate change. Her victory shores up the Democratic majority in Congress ahead of 2022 midterm elections.

“Our leadership in the House and Senate is working really hard to make sure that we can actually pass something this year so that we can bring money home for critical infrastructure,” Ms. Stanbury said during the final hours of voting. “And this is especially important for New Mexico because it includes funding for things like broadband and clean energy.”

Ms. Stansbury defeated third-term Republican State Sen. Mark Moores to fill an Albuquerque-based seat that has been held by Democrats since 2009.

Mr. Moores highlighted concerns about crime in Albuquerque and has painted his Democratic opponent as a progressive with a radical agenda to defund traditional police agencies.

The 1st Congressional District encompasses Albuquerque, rural Torrance County and other outlying areas that include the Indigenous community of Sandia Pueblo.

The district’s voters have heavily favoured Democratic candidates in recent years, shunning former President Donald Trump with a gap of 23 percentage points in 2020 and reelecting Ms. Haaland with a margin of 16 percentage points as voter participation reached an all-time high.

Tuesday’s election is among a handful of races to fill vacancies in Congress ahead of 2022 midterm elections. Democrats held a 219-211 majority in Congress going into Tuesday’s vote in New Mexico.

The district relies heavily on federal military and research funding as home to Kirtland Air Force Base and Sandia National Laboratories.