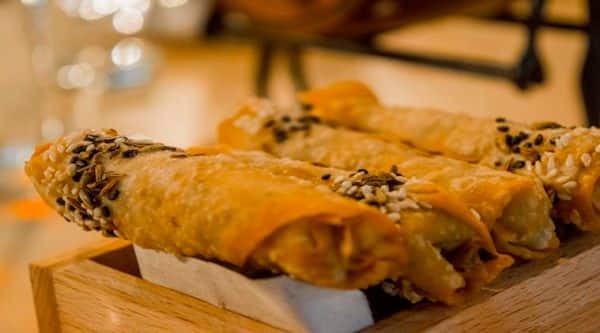 Cafe Cubano is neither a cafe; nor Cuban. Head Chef Rakesh Talwar says that he liked the ring of the name; it sounded like a place where people gathered and talked. The food is a melange of Indian food and old favourites presented with a twist. As Talwar says, “There’s something for everyone.”

We started with the drinks. The Cubano Classic Margharita is a simple cocktail and hard to get wrong, and we weren’t disappointed. On the other hand, the Long Island Ice Tea, which has about five or six different ingredients, is more difficult to perfect- and Cafe Cubano needs to work on it. It was served in an interesting, if slightly treacherous fashion, in what looked like saline or blood bags hanging from metal racks. The drink itself tasted flat and a tad too sweet. The Mumbai Spice Mojito had cardamom, pepper and cinnamon and was very refreshing.

In the “Chotey Bites” section, the Peri Peri Paneer Bites were excellent. The paneer was soft and melted in our mouths. For those who like a bit of a kick, the restaurant’s Tandoori Wasabi Broccoli is worth every bite — the flavour of wasabi is just right. The “Chotey Bites” included a lot of chicken dishes. The Chicken 65 and the Ghati Masala Chicken Tikka were failsafe crowd-pleasers but nothing exceptional.

In the “Sliders” section, we tried the Vada Pav Sliders, which come with a portion of fries. In a city that has high standards of vada pav, the sliders held up with their buttered sesame seed buns and spicy green chutney. The fries were well cooked and seasoned perfectly.

For our main course, we chose the Dabba Bhaji, which was served in a metal pail, and the Angaara Chicken. The bhaji was tasty, and the chicken gravy was rich, spicy, and flavorful. We had it with garlic naan and tandoori roti. The Dal Makhani was the only dish that we tried and did not like- it was strangely sweet.

When looking to the deserts, we would suggest steering clear of the tiramisu, whose consistency rather heavy, like custard. But the chocolate mousse, another classic, was light, delicious, and would make excellent comfort food. The icing on the cake, however, was the Banofee Glass. Sliced banana, crumble and whipped cream made it a simple desert, but its freshness was perfect after a heavy meal.

The restaurant’s decor was not memorable, but it was cosy enough. A note of warning about the different branches. The Cafe Cubano branch in Vile Parle has different food- though still no Cuban. It’s a little more “conservative” and family friendly- its menu includes sizzlers but not the sliders. But the Kemps Corner menu is so popular that Talwar is thinking of replicating the same for his Vile Parle branch.