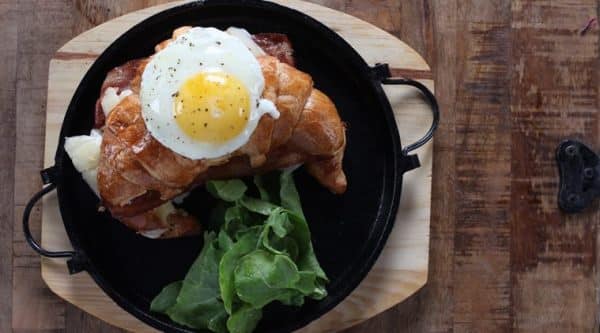 Doppio, which means a double shot of espresso, promises to be the hip new thing for the “elite SoBo crowd”. While its interesting drinks menu lives up to this promise and the food is good, the ambiance is cliched.

What immediately hits the customer after walking is a sense of deja vu. The whole look is very Cafe Zoe industrial chic; it even has Cafe Zoe’s hanging light bulbs, black wooden chairs and industrial duct running alongside the ceiling. Doppio has also adopted the perfunctory vintage twist, with leather-bound books and antique binoculars, clocks and globes used as decor. On one wall are empty photo frames, and the other wall is papered with pages from a hundred year old stamp book, painted over by a local artist.

The food menu is much more daring but also a little more incoherent. The customer would be best off asking servers for Doppio’s specialties and sticking with those. While most dishes are Italian-inspired, there are also a couple of East Asian dishes such as a Chili Soba Stir Fry and Thai Basil Chicken Brown Rice thrown in, as well as a Sri Lankan Kothu Paratha dish. But overall, Doppio does a good job of dressing up old favorites with exciting twists. For example, the creamy and flavourful classic mushroom soup comes with stuffed cremini mushrooms and duxelle, a mushroom paste, on toast. The old tomato and mozzarella salad is re-imagined with oven-kissed tomatoes and burrata, a cheese made with mozzarella and cream, on an aubergine caviar. The different flavors complemented each other well. The black mission figs and arugula, with candied almonds and smoked mandarin dressing, was however too sweet to be enjoyable.

The small plates include familiar dishes – Truffled Mac and Cheese with Sun-dried Tomato Relish, for instance, or walnut butter gnocchi – but also delve into the more eye-brow raising Vietnamese Cottage Cheese Tacos and Pickled Carrot and Papaya salad. The Barbecue Pulled Chicken Sliders with Onion Marmalade were good, but the house-made ketchup they served did not go well with it. Within the large plates, the Artichoke and Sun Dried Tomato Ravioli with Succotash and Genovese Pesto, was a stand-out. Doppio has a limited selection of desserts, and the one that we tried – the Doppio Affogato with coconut macaroons- was disappointingly plain.

The drinks at Doppio are what really make the place worth going to. The Doppio Espresso House Martini, the first drink on the menu and the server’s recommendation, is definitely their signature drink. It is a combination of Absolut Vanilla Vodka, house coffee liqueur, espresso, and sugar syrup, and it’s perfectly mixed. The Monk’s Press Coffee is also delicious, made of Old Monk Rum, lemon juice, pineapple juice, espresso, and coffee liqueur.

This could be why Doppio gets rather crowded after 10:30, even on weekdays. On weekends it’s jam-packed. Overall, it’s a nice place to try out. But it’s just nothing very new.