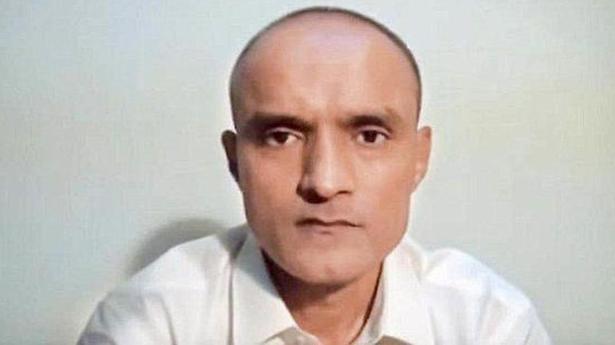 Mr. Jadhav, the 50-year-old retired Indian Navy officer, was sentenced to death by a Pakistani military court on charges of espionage and terrorism in April 2017.

A Pakistani court has adjourned till October 5 the hearing of a government’s plea to appoint a counsel for Indian death-row prisoner Kulbhushan Jadhav on request of the country’s top law officer, according to a media report.

Mr. Jadhav, the 50-year-old retired Indian Navy officer, was sentenced to death by a Pakistani military court on charges of espionage and terrorism in April 2017.

India approached the International Court of Justice against Pakistan for denial of consular access to Mr. Jadhav and challenging the death sentence.

The Hague-based ICJ ruled in July 2019 that Pakistan must undertake an “effective review and reconsideration” of the conviction and sentence of Mr. Jadhav and also to grant consular access to India without further delay.

On Tuesday, the Islamabad High Court (IHC) adjourned the hearing of the government’s plea to appoint counsel for Jadhav till October 5 at the request of the Attorney General for Pakistan (AGP) Khalid Javed Khan, The Express Tribune reported.

The court also issued notice to the counsel of the Indian High Commission to appear before the court on the next date of hearing.

At the last hearing of the case on May 7, an IHC larger bench – comprising Justice Athar Minallah, Justice Aamer Farooq and Justice Miangul Hassan Aurangzeb – gave India another chance to appoint a counsel for Mr. Jadhav by June 15.

At an earlier hearing, AGP Khan had informed the court that India contends that the appearance of its consul before a Pakistani court to defend Mr. Jadhav would amount to submission to the jurisdiction of the court and would violate its “sovereign immunity”.

The larger bench had later issued a three-page written order stating that submission to the jurisdiction of any court is “quite distinct” from appearing before a court to assist it in a matter. “At this juncture, the court is conducting proceedings only to work out the way forward to implement the judgment of the International Court of Justice (ICJ),” the order had said.

The court had said that it was only trying to figure out a way to implement the ICJ order and it needs to be brought to the attention of India so that it may enter the appearance and express its reservations about procedure and methodology for implementation of the judgment. “The present proceedings are being conducted to ensure that Commander Jadhav is provided with a fair opportunity to defend himself in the review proceedings to be carried out as ordered by the ICJ.”

“In view of the foregoing, the government of Pakistan shall make another effort to communicate with the government of India regarding the purpose of the instant proceedings and ensure presence before the court,” the order noted.

The Pakistan government last week rushed through the National Assembly a bill to provide the right of appeal to Mr. Jadhav, amidst ruckus and boycott by the Opposition. The bill is aimed at allowing Mr. Jadhav to have consular access in line with the ICJ verdict.