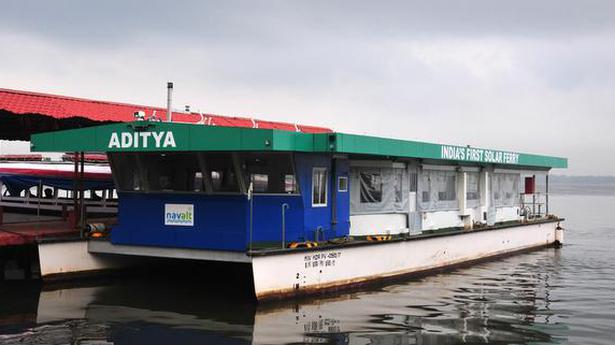 The State Water Transport Department (SWTD) will procure two 75-seater solar boats so as to curb pollution caused by its fleet.

The two boats will be on the lines of Aditya, the country’s first solar-powered ferry, launched in 2017 and operating between Vaikom in Kottayam district and Thavanakkadavu in Alappuzha district in the Vembanad backwaters.

Transport Minister Antony Raju said administrative sanction had been given by the government to the SWTD to procure the two solar boats at a cost of ₹6 crore. Steps will be taken to launch the new boats in one-and-a-half years.

Powerful lithium ion batteries will be used in the two solar boats to enable them to operate at night, the Minister said.

Around four lakh people had travelled annually in Aditya, which has covered 80,000 km so far, saving 1.3 lakh litres of high-speed diesel for the SWTD. The ferry, designed by Navalt, is equipped with facilities such as echo-sounder, GPS, hydraulic steering, and automatic pump to remove water.