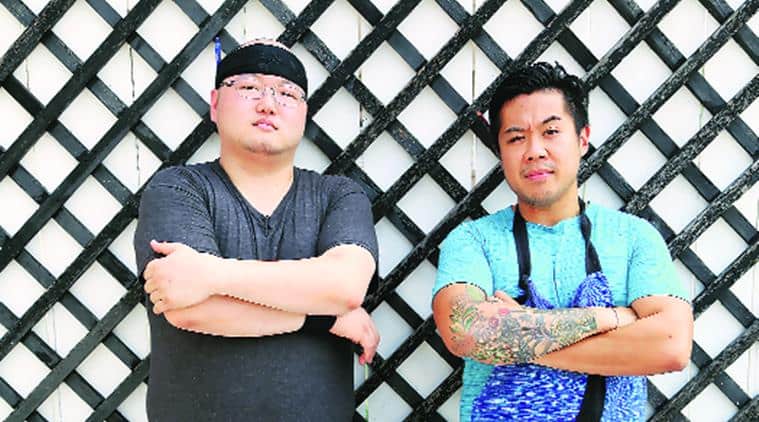 Chef Kelvin Cheung (right) has collaborated with Chef Boo, who moved from Chicago to Mumbai

He is stubborn. If a dish he has created doesn’t work with his patrons, Kelvin Cheung would rather take it off the menu than tweak it. For instance, while designing the menu for the new Bandra resto-bar, One Street Over, where he is heading the kitchen, Cheung wanted to create something with corn and prawns, something “very southern American”. The Canadian-Chinese chef, who became popular on the Mumbai dining scene for creating edgy versions of staple dishes at Colaba’s Ellipsis, came up with an idea. He sauteed cornbread crumble with lemongrass. “It didn’t translate to customers’ tastes. I loved it and I will use it on the menu, but not here,” says the 36-year-old.

Like with any rule, there are exceptions to this one, too — his father. “I cook for him, but not my style. He wants his food his way. He doesn’t like herbs or spices. So if I use these when cooking for him, I have to mask them,” says Cheung, who idolises his restaurateur father. “He has a pretty amazing story,” says the chef.

Old man Cheung moved to New York from Hong Kong at the age of 18, with $20 in his pocket. He started as a server in a restaurant in Chinatown, working his way up, while also studying business. “Counted among the upper echelons of restaurateurs who serve Hong Kong Cantonese, today, he owns eight restaurants and is about to open another,” says the chef, who had returned home after his nearly four-year stint at Ellipsis ended last year. It is also at the family establishment that he first got acquainted with the kitchen at the age of 12, starting with washing the dishes.

From his father, Cheung inherits stubbornness. He realised early on that he isn’t cut for hotels. “My style doesn’t suit the environment, which is more structured and depends on numbers. Very often, I would get called by the HR for yelling or having an attitude,” he says.
Cheung prefers to wake up mornings to personally purchase fresh produce from the market, brainstorm and do what he does best — experiment. While he doesn’t like to conform to a genre of food, Cheung believes every menu should follow a philosophy “else it can be all over the place”. At One Street Over, the compact menu comprises small plates, mains and all of three desserts. While each dish seems familiar, Cheung’s brand of innovation is obvious when one tastes them. Take for instance, the Kung pao brocolli with peanuts, chillies and hoisin sauce, or the fried chicken he serves with waffle, maple syrup, honey and truffle oil. There is a distinct Asian touch to the dishes, perhaps for his collaboration with chef Boo Kwang Kim, who has moved from Chicago to Mumbai for this venture.

The menu, Cheung adds, is in tandem with the philosophy of the restaurant. One Street Over, which is his collaboration with Aalia Hospitality, is centred on the bar. “We want it to be a place where working professionals will hang out a couple of times a week,” he says, explaining that the place is unlike any other in the neighbourhood, which mostly caters to college students and aims for numbers. The menu, thus, steers clear of the bar staples, such as nachos, hummus and fries. Instead, it offers green beans or cauliflower, served with dressings such as cashew hummus or soy garlic dressing — “healthy dishes one won’t mind having a few times a week”.

While Cheung has established himself as a chef in both Indian and international culinary scene and is charting an independent path, success to him will be his father’s approval. “I hear he approves of what I have achieved but he won’t ever say it to me. He is an old-fashioned Chinese man and our relationship is kind of awkward — we have hugged all of thrice in our entire life,” says Cheung, “Our phone conversations last two minutes, where he will ask me how I am, why I am not working, say he is busy and hang up.”

Naturally, for Cheung, his father remains the benchmark. “Not nine, but I’d be happy to own one restaurant. A small place — may be smaller than One Street Over, where I make and serve food the kind I want to, the kind I like,” he says.