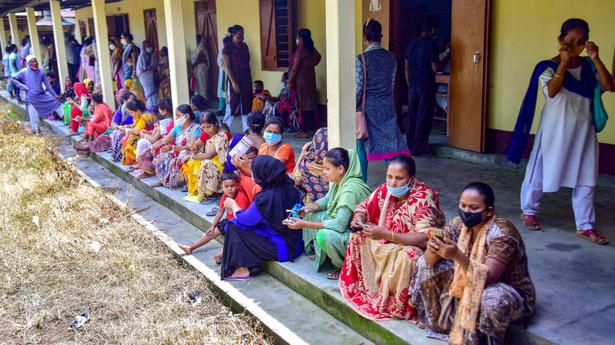 The COVID-19 vaccination status has been linked to the opening of shops and business establishments, operation of commercial passenger vehicles as well as the salaries of some government employees in the Northeast.

Besides, these are incentives such as free rice and cash offered by some local authorities to counter the reluctance or resistance to inoculation by people, many of who are convinced that the serum induces infertility and genetic changes.

On June 23, the High Court of Meghalaya directed all shops, commercial establishments, taxi, auto-rickshaw and bus operators to display the vaccination status of their staff. This followed the hearing of a petition challenging the orders of the State’s deputy commissioners asking shopkeepers, vendors, local cabbies and others to get vaccinated before they resume their business.

The orders of the district heads, the Bench of Chief Justice Biswanath Somadder and Justice H.S. Thangkhiew observed, should be seen as a “persuasive advisory” and not coercion. The court said all shops, commercial centres and public commercial vehicles should prominently display the words “vaccinated” or “not vaccinated” to let their customers or passengers know about their status.

“In the event, any shops/establishments/local taxis /auto-rickshaws/maxi cabs and buses flout the above directions, the authority concerned of the State shall immediately direct its closure/stoppage of plying,” the court ordered.

The court also said the authorities should immediately step in and proceed in accordance with the law if there was any attempt made by any person or organisation to spread misinformation regarding the efficacy of vaccines among the people of the State.

Hours later, the Assam government directed all the departmental heads to ascertain the vaccination status of their frontline employees before releasing their monthly salaries.

Chief Secretary Jishnu Barua, also the chairperson of the State Disaster Management Authority, Assam (ASDMA), issued the order after officials found out that many frontline government employees had not taken their COVID-19 vaccine shots.

“Non-vaccination of such frontline government servants may give rise to the possibility of further spread of the virus, which in turn may endanger the lives of common citizens, especially the vulnerable groups like children, pregnant women, etc.,” the order said.

“Direct all department heads to ascertain the vaccination status of such government servants before releasing the monthly salary/remuneration from the current month (June) onwards,” it added.

ASDMA officials clarified that the order was meant for employees of certain departments such as police, health, disaster management, revenue and transport where contact with the public was unavoidable.

The Assam government had earlier instructed all its employees to join duty from June 14 if they had received both doses of the COVID-19 vaccine. The State government is expected to relax restrictions from July 1.