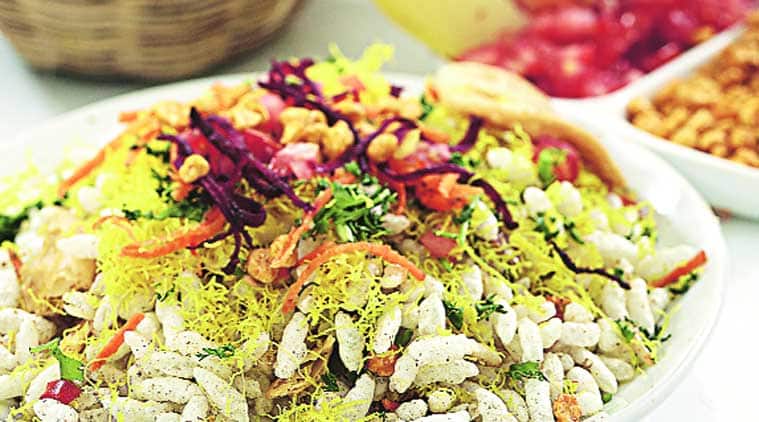 The best chaat bungs together so many little bits.

Taazi gobhi-baasi paranthe hardly sounds like your quintessential Holi treat. But at my grandparents’ house, this was a breakfast tradition as firmly established as, well bhang, chaat, gujiya and all those other mouthfuls one associates with Holi.

Cauliflower, its freshness apparent in its distinct taste, was sauteed with ginger and a pinch of asafoetida and reduced to a pulpy mass, where flavours blended but the sharpness of heeng always stood out. Fresh from the karahi, it would arrive onto the table, piping hot, only to be scooped up by bits of triangular parantha, pan-fried the night before, and eaten quite deliberately, cold — at room temperature.

Anyone who has been raised in north India knows at least a bit about the obsession most families have — or had, before our frenetic lives made Maggi quite an acceptable meal — with hot breads. Pooris, phulke, paranthe, even tandoor-baked bread was always served hot, straight from the karahi, tawa or oven. My family was no exception. So, why and when did they decide that baasi paranthe, literally “stale bread”, should begin Holi?

Part of it must have been convenience. With everyone playing Holi in the morning, who would subject to the laborious process of rolling out dough? But in my mind, the unexpected juxtaposition of baasi and tazaa, stale and fresh, the unexpectedness of finding something like this on a festive table, is also pretty symbolic of everything to do with Holi: the only festival in the subcontinent that celebrates the abandoning of social mores, breaking of boundaries, demolishing of propriety, and the sheer joy of living.

Stale is quite acceptable in this state of bacchanalia. After all, what else is wine? Or, kaanji for that matter? Like alcohol, kaanji, “pickled carrot-water”, is a fermented drink. Some call it a substitute for alcohol. For those who quaked in their shoes at the unknown journeys bhang-induced euphoria could take them to, kaanji was a safer bet.

Assembled from black carrots (or regular carrots to which beetroot had been added for a dash of vibrant red), red chilli powder, black salt and mustard seeds ground into a paste, the water was left out in the sun for about four to five days before mustard enabled the fermentation. It may as well have been the first “mocktail” of our region: certainly the sharp sour plus bitter of the flavour profile is quite akin to any good cocktail or mocktail.

If Holi shattered sobriety, one of the ways in which this spirit was exhibited was by tricking unsuspecting folk. They could be sprayed with coloured water and dunked into waterbodies if they were not looking; or they could be fed bhang-laced pakore or gujiya, not to mention thandai. What could be more innocuous than a deliciously sweet, milky drink, spiced with fennel and peppercorn? And, indeed what could be more dangerous?

But this whole trick-or-treat Holi sensibility is reflected in other eats too. A gujiya, for instance, is but a sweet samosa. In a different century, you may have expected to bite into meaty mince when you broke through the shell of the phyllo pastry. In the later-day Mughal bazaars, aloo may have become a fair substitute. But when did khoya, condensed milk, start edging in? Did Braj, the land of milk and milkmaids, so intrinsic to the Holi traditions both in music and exuberance, have any part to play?

“Fun with food” may be a more recent phenomenon that every chic, inventive chef today is embracing. But nothing reflects playfulness more than chaat. The best chaat bungs together so many little bits: tangy with sweet, sour with spice, squishy topped with crunchy. Nothing is allowed to stay pristine. You can’t taste one single ingredient. You taste everything at once. Not for nothing is it so firmly entrenched in the Holi tradition. A must at the brunch parties, accompanying hasya kavita and gulal. If you could taste a splash of different colours, perhaps, this would be it.

Some of the best, freshest, most unexpected cocktails you can drink in your city:

It is that classic that never goes out of fashion. The gulal colour just makes it even more apt for Holi.

Bongtails at Raasta, Gurgaon and Delhi

So you want coloured cocktails to keep up with the festivities? The new Bongtails even come in glass bongs (waterpipes, used for smoking up, if you please).

Elderflower may be more Nordic than Indian but the syrup goes well with sparkling wine to give you a refreshing, sweet cocktail.

Punch at The Bombay Canteen, Mumbai

There are different house versions, made from ingredients as varied as kokum, pomegranate juice and apple-cinnamon tea. Brewed overnight, these cocktails served in customised brass pots, have been conceptualised and designed by Dimi Lezinska, the best in the business.

If you’ve heard of Bloody Mary with sweet-and-sour saunth, at Indigo Deli, the idea seems to have been poshed up with the special imli cocktail.